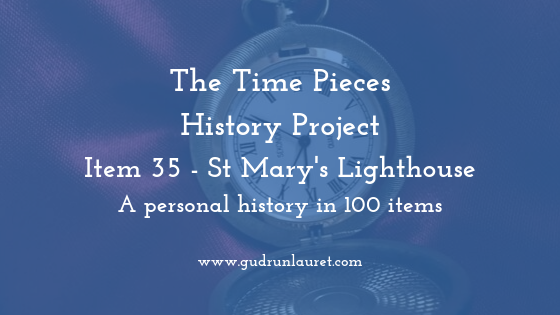 First time on the blog or new to the Time Pieces History Project? Find out what it’s all about here, and then come back to this page for today’s item – St Mary’s Lighthouse. 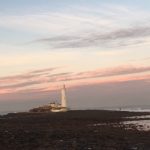 One of the best things about living in the north east is that we’re really close to the sea. Many of our weekend trips when I was a child involved a drive up to the coast, and my parents have always been fond of a brisk march across the beach in the middle of winter.

We particularly like to walk from Whitley Bay to St Mary’s Lighthouse, which sits on the tiny island of St Mary a couple of miles along the sand. You reach it by a causeway, and there’s nothing else on the island apart from a small garden and a visitors’ centre. Having a dog makes the freezing walks more palatable, too!

The History of St Mary’s Lighthouse

Throughout the course of this project, we’ve seen that naming things after St Mary (in all likelihood referring to the mother of Jesus) is common throughout the north east of England. It’s not clear why the island and lighthouse were named after her, though, as St Venerius the Hermit is the patron saint of lighthouse keepers. It’s also unclear why he got the job.

The lighthouse, though, IS on the site of a monastic chapel dating back to the 11th century, so that may explain the 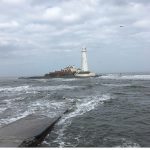 name. The monks operated a lantern on a tower to alert ships to the rocks surrounding the island. The cottages and lighthouse are made of 750,000 bricks and 645 blocks of stone, and the light was generated by paraffin.

From the North Tyneside Council website, we learn that the lighthouse was completed in 1898, and was in service for almost 100 years. The lighthouse keeper’s cottage is now the visitors’ centre. There are 137 steps to the top, although I’ve never been up – I didn’t even know it was possible!

Lighthouses always make me think of smuggling, and, like other coastlines, Northumberland was a prime spot for bringing in contraband. A few miles away, at Boulmer (pronounced ‘Boomer’) near Alnwick, smuggling was rife in the 18th and 19th centuries, as was dealing in the goods.

The Fishing Boat Inn was the HQ for the smugglers, and petty criminals came from all over to buy and sell tobacco and spirits from the Netherlands. One of the most frequent visitors was William Faa, who came from a remote village across the border into Scotland.

Faa was known as the King of the Gypsies, and as well as the smuggling, worked as a miner and fisherman. In his hometown of Kirk Yetholm, he ran The Queen, an inn where he sold the gin he’d brought in from Boulmer. On his death in 1847, Faa’s crown passed to his sister’s husband. 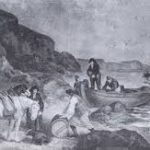 Likewise, at Beadnell, just along the coast, the taxes enforced to pay for the Napoleonic Wars led to smuggling. In 1762, one load alone contained 400 gallons of rum and gin, 1,000 gallons of wine and 2,700 of brandy were landed, making it good way of bringing in income.

Local historian Dr Tony Barrow says that smuggling began after Edward I brought in customs duties on wool in 1275. From 1453 wine was smuggled, but it was the introduction of mercantile legislation in 1660 that smuggling really took off.

Gangs of up to 50 men operated the large boats along the coast, and the remote beaches where they docked were rarely properly protected. The government was unsuccessful at combatting smuggling, despite repeated attempts to legislate against it. In 1718, the Hovering Act was introduced to allow customs officials to board any vessel hovering within six miles of the shoreline.

I’m cheating slightly, here, as Grace Darling lived out at the Farne Islands, so I should have put her in blog 25, but she’s the most famous lighthouse keeper I know of, and her story is dramatic, impressive and ultimately rather sad, so I’m including her here.

Born in Bamburgh in 1815, Grace’s father William was the keeper of both Brownsman Lighthouse on the island of the same name, and that of Longstone. A beacon was most likely placed on Prior Castell’s tower some time after 1669, but the first lighthouses were built in 1776. The beacon tower on Brownsman was built in 1795, and was replaced by a lighthouse with a paraffin oil with a revolving reflector in 1810.

Grace’s grandfather had been the lighthouse keeper on Brownsman Island first, and William, the only boy in a family 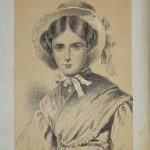 of seven, was his natural successor. William later married Thomasin Horsley, who at the age of 31 was 12 years his senior. They had nine children, who all learned to row boats when they were young.

William and his sons would rescue sailors who got into trouble, while Thomasin and the girls were responsible both for keeping watch and making sure the lantern was burning, as well as preparing to deal with the aftermath of any disasters.

William suggested an additional lighthouse be built on nearby Longstone Island for extra security, and it was completed in 1825. The family moved in the following year, when Grace was 10. Many of the children were educated in Bamburgh and moved away to settle down. Grace, however, was educated at home, eventually becoming William’s assistant. She was at home on Longstone in 1838, when the SS Forfarshire met its fate on the rocks around the Farnes.

The ship left Hull on 5th September, bound for Dundee. Two days later, with boiler failures and a storm brewing, the captain decided to shelter in the Farne Islands. Struggling to navigate in the rain, he aimed towards what he thought was a lighthouse on Inner Farne. Unfortunately, the ship struck the rocks just off Longstone, causing it to split in two and killing most of the passengers and crew.

Grace and her parents were the only family at home at the time, and it was Grace who noticed the ship in distress and woke her father. With Thomasin holding the fort, William and his daughter set out in their 20-foot boat to search for survivors. They had to take the long way round, but reached the outcrop where those still alive were huddled. 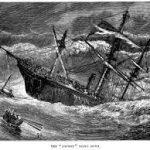 While William climbed onto the rocks to help people to the boat, Grace kept it steady. It took two trips to rescue the nine survivors, with William completing a second trip with the help of two of the crew. The following day, a rescue boat set out from Seahouses, to look for any survivors.

Finding none, and unable to return home, they managed to get to Longstone and were shocked to find the Darlings tending the people they’d pulled from the wreckage. The storm raged on for another three days, meaning the Darling family had to care for both those from the SS Forfarshire and the lifeboat men who couldn’t get back to Seahouses.

News of Grace’s bravery spread around the world and she was sent all kinds of gifts. She was the subject of songs, plays, paintings and novels, and she was featured on souvenirs. Grace received marriage proposals and was obliged to write thank you letters in response to the many messages sent to her.

She was constantly in demand, invited to attend all kinds of events, to meet with dignitaries and talk about her experience. Used to her quiet life on the islands, Grace struggled with both her new-found fame and the obligations of other people. After two years, she was exhausted.

Seeking peace and quiet in spring 1842, she went first to her brother’s lighthouse on Coquet Island and then to Alnwick, where she caught a cold. From then, her health declined rapidly. She went to Longstone, Wooler and then back to Alnwick before her father took her to stay with her sister in Bamburgh.

Grace was diagnosed with tuberculosis, but the stress of constant visitors and requests for her time had worn her out, no doubt contributing to her illness. She died at the age of 26, in her father’s arms, only a couple of days after giving away all her possessions.