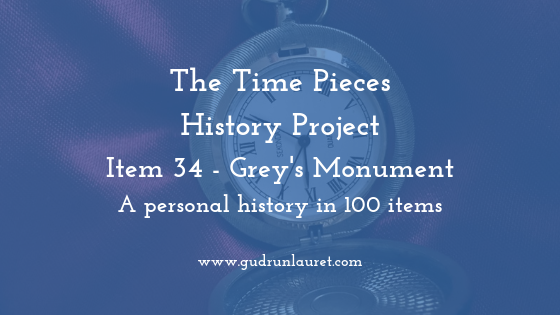 First time on the blog or new to the Time Pieces History Project? Find out what it’s all about here, and then come back to this page for today’s item – Grey’s Monument. 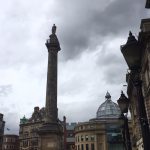 If you go into Newcastle city centre, you can’t miss Grey’s Monument. It towers over the streets and buildings around it, and it’s so high that you can hardly make out the statue at the top. You can actually go inside the Monument and up to the top, but it’s only open a few days of the year, in summer, and I’ve yet to get up there.

The balcony below the statue is reached by climbing 164 steps which are inside the column. There’s a small hatch on one side of the base of the Monument, which is the entrance, and as I’m somewhat claustrophobic, this worries me more than the ascent.

Grey’s Monument was always the meeting place on Saturday mornings when I was a teenager, although you had to specify which side you’d be on, as otherwise you’d waste half an hour or more at FM’s while your friends were outside FCUK. It’s also a place for buskers, bands and protestors. In the summer there’s an outdoor TV screen with deckchairs at the front, there’s a monthly farmers’ market and the Christmas light switch-on happens there every year.

The History of Grey’s Monument

Grey’s Monument stands in the heart of Grainger Town, with the 13-foot statue, sculpted from Portland stone, resting atop a Roman Doric column 134 feet high. The column is made from gritstone, although I don’t know what that is.

Sculptor Edward Hodges Baily, who went on to carve Nelson for his column in Trafalgar Square, was employed by 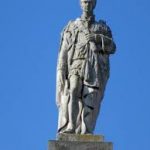 Benjamin Green, who designed the column. The foundation stone was laid in September 1837, with Earl Grey taking up residence the following year.

But why was Grey honoured in such a way as to have both a street named after him and a statue carved in his image? Well, Grey, who came from Northumberland, was Prime Minister between 1830 and 1834, and the only PM from the North East.

OK, we may count Tony Blair, who was MP for Sedgefield in County Durham before becoming Labour leader, as a North East PM, although he was born and educated mostly in Edinburgh. Grey was also a keen reformer, with his government overseeing the abolition of slavery, and he has a rather delicious tea named after him (as does his wife).

Charles Grey was born in 1764 into a long-established, successful Northumbrian family. His father, the first Earl Grey, was a successful general, who fought in the American War of Independence, the French Revolution and The Seven Years’ War.

His army career earned him the nickname ‘No-Flint Grey’, because his men were ordered to use only their bayonets during night approaches and to remove their musket flints. He was awarded the Most Honourable Order of Bath for his military prowess. 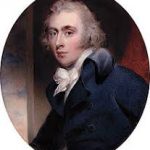 The death of Charles’ older brother made him heir to the family estate, and he was educated at Eton and Trinity College, before he stood to represent his county as an MP in 1876, aged only 22. He advocated for parliamentary reform and Catholic emancipation, and was made both Foreign Secretary and leader of the Whigs in 1806.

However, the following year the Ministry of all the Talents (a coalition) he was part of dissolved in 1807, and the year after the government fell. Grey spent 23 years in opposition, sitting in the Lords once he inherited his father’s title. In 1830, became Prime Minister, spending four years bringing in social changes.

In 1832 his government introduced the Representation of the People Act, which brought about changes in the electoral system, including universal suffrage for men and women and the following year saw the Abolition of Slavery Act. When the government dissolved in 1834 he returned home to Northumberland, although he remained interested in politics and critical of some policies introduced by later governments.

Formed in 1678, the Whig Party returned 16 Prime Ministers and established the primacy of Parliament over the crown during the Glorious Revolution in 1688. They also founded the Bank of England (1694) and the Act of Union between England and Scotland (1707). In the 150 years after that, the only other main party was the Tories.

The Whigs stood for progress, and passed laws to support religious minorities, pro-immigration bills and other laws 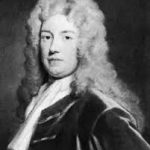 to make Parliament more representative of the whole country. Early leader Robert Walpole is regarded as the first Prime Minister of Great Britain, and its longest-serving, holding office for 21 years.

Having started out as representing the aristocracy, by the 19th century the Whigs were supported by traders and those in industry, particularly as they pushed for free trade. The name ‘Whig’ is short for ‘whiggamor’, a west Scotland term for cattle driver. It was used as a derogatory term first against the Covenanters in Charles I’s time, and again during the Exclusion Bill period, applied to those were anti-Roman Catholic. 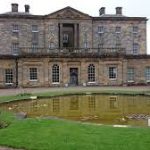 Charles Grey’s family seat, Howick Hall, can still be visited today, and features extensive gardens and an arboretum. It was built by the architect William Newton in 1782, and enlarged in 1809 by the second earl, including the construction of a terrace.

The interior of the house was destroyed by fire in 1926, and when it was rebuilt two years later it was drastically changed, actually making it smaller. Although the family moved out after the death of the 5th earl in 1963, the West Wing was turned into a residence by Lord Howick (as the title is now) a decade later.