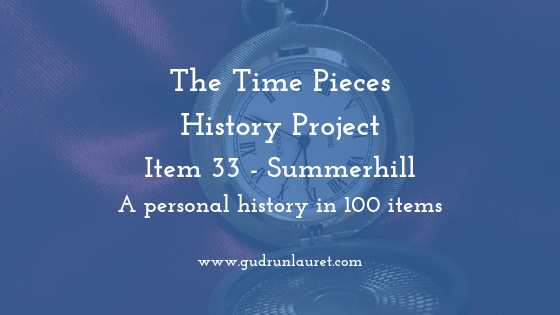 First time on the blog or new to the Time Pieces History Project? Find out what it’s all about here, and then come back to this page for today’s item – Summerhill.

Our house is on the right.

We moved to the Summerhill when I was six, living there until I was 14. My grandparents lived in a village a couple of miles away, so I went to a school in the same place. It was a great place to be when I was really young, but as I got older I didn’t like being so far away from my friends at secondary school.

There were three houses right at the bottom of the hill, and all the rest were on our side of the road. Although we were only a few minutes from Blaydon town centre, there was open grassland opposite the house and fields full of horses just up the hill, so there was a sense of isolation, which I mostly enjoyed.

I had an overactive imagination, which was fuelled by the remote setting, the wildlife and the lack of other children. I spent many happy hours on my own scrambling up and down brambly hills, cycling round and round the gravelled parking circle or hiding in the trees with my book. The house was tiny, but we had family visit often, and we went through the fields at least once a week. In autumn we picked blackberries and in winter we went sledging, so it was, I suppose, rather idyllic.

The History of Summerhill

“Summerhill” to me means the name of the steep hill we lived on, but in fact it’s also the mound at the top, where we played as children. That was originally known as Summerhouse Hill, and the hump opposite was Image Hill. These two hills were once part of the Stella Hall estate.

There was most likely a settlement on Summerhill thousands of years ago, built there because of its location. In 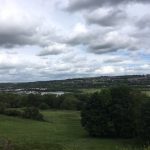 1930, some boys playing at the top of the street found a stone cist, or coffin. A reconstruction of the cist is at the Great North Museum (formerly the Hancock Museum).

The Bronze Age couple within were found with a knife and a beaker and are thought to have died between 1000 and 2000 BC. The theory is that they were married, and in all likelihood the woman was sacrificed when her husband died. I remember the hole left by the cist very well, as one of my uncles jarred his back falling into it while sledging during a particularly snowy winter!

After the Bronze Age, a Norman manor house and nunnery were built on the hill, and in the Tudor times, the Tempest family, successful merchants and colliery owners, built Stella Hall. The village of Stella, just down the road, was the headquarters of the English army in at the time of the Battle of Newburn Ford in 1640. Oliver Cromwell stayed at the Hall in 1651. 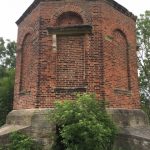 Stella Hall came into the possession of the Widdrington family through marriage in 1700. At this time, the red, octagonal folly, which still stands today, was installed as a summerhouse on the hill, hence the name. Image Hill was the home of two statues, one of Apollo, Greek god of the sun, and the playwright Aesculapius.

Stella Hall then became the property of brick and mine magnate Joseph Cowen, who was also an MP. His son, also Joseph, followed in his father’s footsteps, and between them they raised the family from their working-class origins to important and powerful business owners. The Hall was modified twice, first by the architect James Paine, and again by our old friend John Dobson. It remained in the family until the death of Jane Cowen, daughter of Joseph Jr, and was sadly demolished in the 1950s.

The Battle of Newburn Ford

The Battle of Newburn, or sometimes the Battle of Newburn Ford, took place in August 1640. King Charles I had tried to introduce a new prayer book in Scotland, which didn’t go down too well. 20,000 soldiers, led by Alexander Leslie, decided to invade, coming from the south of the Tyne.

There were around 4,500 English troops defending the ford, and they were no match for the attackers. Newcastle 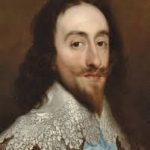 surrendered after two days, and Charles had to recall Parliament. He was told that they would not fund a war against the Scottish.

The battle took place in what is referred to as the Second Bishop’s War, with the first taking place a year earlier. Charles was attempting to reform the Scottish church, and in response it introduced the Scottish National Covenant, whose proponents were aggressive in their defence of their religion. It was these Covenanters that Charles was trying to fight.

Joseph Cowen Sr’s family were originally from Lindisfarne before moving to Winlaton, where my mum’s family lived. Joseph himself was born just up the road in Greenside, in 1800, and served as an apprentice chainmaker at Crowley’s ironmongery factory, where his father worked.

As a young man, he became interested in the welfare of his fellow workers, concerned about equality and workers’ rights. He was no doubt inspired by his employer, Ambrose Crowley, who established a fund for employees who could no longer work, provided free schooling for local children, and paying for a doctor for staff and families. 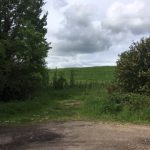 He was a member of ‘Crowley’s Crew’, a group of workers who fought for their rights. He attended reformation meetings in Newcastle, and became first secretary and then president of the Blacksmith’s Friendly Society. He was made Mayor of Newcastle in 1853 and later represented the city in parliament, becoming a Liberal MP in 1865.

Cowen and his brother in law went into business in 1828, where they manufactured fire bricks. I remember finding these bricks around the Burn, near where they were made, when I was a child. The Cowen stamp was still clear to see.

Joseph Cowen Jr was educated at Edinburgh University, where one of his teachers was Scottish preacher Dr. John Richie. A radical himself, Richie no doubt encouraged Cowen Jr’s interest in the revolutionary political movements sweeping through Europe in the middle of the 19th century.

He played an active part in the family business, and, like his father before him, spoke at workers’ meetings and 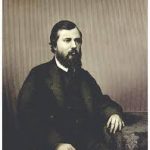 became an MP later in life, winning his father’s seat in 1874. He was short and stocky, and once in parliament was known as “The Blaydon Brick.”

Throughout his life, Joseph Jr worked tirelessly for the causes that he was passionate about, even when it put him in opposition to his own party. In 1859 he bought the Newcastle Chronicle, which he used to further publicise those causes, including encouraging the opening of a College of Science in Newcastle. He also co-founded the Tyne Theatre and Opera House, which opened in 1867. Both this and the newspaper are still flourishing today.

Garibaldi was born in Nice in 1807, which had been annexed by the First French Empire (of Napoleon) two years earlier. His parents were Italian, originally from Liguria. In 1814, Nice was returned to the control of King Victor Immanuel I of Sardinia, and then annexed again in 1860, which the adult Garibaldi opposed. 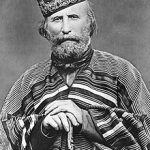 He was a republican, and worked towards the establishing of the Kingdom of Italy and Italian unification. He was a highly respected general, and his successes in Europe and South America led to the nickname “The Hero of Two Worlds.” He became known and respected around the world because of his ideals.

So how did Garibaldi end up on the Summerhill, and temporarily have a statue erected to him? As we’ve seen, both Cowens were interested in reform, and Cowen Jr invited the Italian to visit him during his UK trip in 1854. Garibaldi stayed for a few weeks, although stayed most of the time in Tynemouth.

Cowen Jr asked Garibaldi to speak at a number of rallies, which he did to great applause. In 1868, Cowen commissioned sculptor George Burn to carve the statue, which stood not far from the summerhouse. He may have been prompted by Garibaldi’s thwarted second visit to the UK in 1864, when authorities refused him entry to the 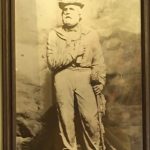 Not long after Cowen Jr’s death, the statue disappeared from Summerhouse Hill. Two explanations have been offered – one is that disgruntled brickwork employees had knocked down in retaliation for having been made to pay towards its manufacture. Another theory is a group of boys rolled it down the hill.

The statue broke up, with various pieces ending up in gardens on the Summerhill. The head, discovered in the 1940s, was donated to the local Blaydon Library in 1977, where you can still see it now as you walk in. The legs, allegedly, are still in the garden of one of our former neighbours, and I remember trying to peer through their gate to look for them.