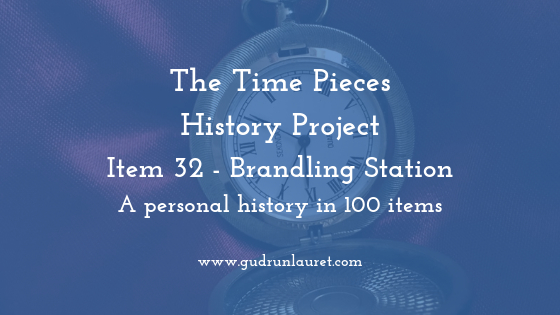 First time on the blog or new to the Time Pieces History Project? Find out what it’s all about here, and then come back to this page for today’s item – Brandling Station. 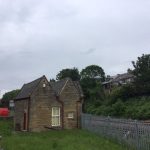 It’s easy to overlook Felling these days, with most of the shops on the High Street closed and many people out of work. But at one time, it was a very different place – a thriving village with all kinds of things going on. The beautiful town hall and police station which stands opposite are a testament to that, as is the strong sense of community that’s still in evidence now.

Tucked behind the metro station, on the opposite side to the hectic Sunderland Road, Brandling Station is a small, unassuming structure that is passed unnoticed by hundreds of people every week. But like so many other sites, it has a significant history that deserves to be recognised.

The History of Brandling Station

I should say that there IS a blue plaque on one wall of the building, but it’s hard to see with the railings in front of it. 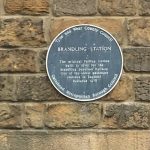 It explains that the little construction is actually one of the oldest passenger stations in England, and was opened in 1842 as the Felling Station for the Brandling Junction Railway.

In his book Gateshead Perambulations, Desmond O’Donnell provides more information, telling readers that when he first used Felling Station in the 1930s, it retained offices for the station master and ticket collector, and a coal-fire-warmed waiting room, amongst others. All that remains is the blue-plaqued building, which still bears the Brandling coat of arms.

The Brandlings were one of several successful coal families in Northumberland and needed to transport their coal down to the Tyne so it could be quickly shipped to London, where people were prepared to pay handsomely for their wares. 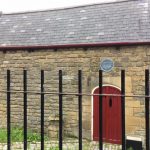 Along with the Russell and Bowes families, they had wagonways erected to transport coal. Brothers William and John Brandling secured themselves an Act of Parliament in 1835 to build the Brandling Junction Railway, which ran from Gateshead to South Shields, with work beginning in Felling a year later.

The station opened in 1842, and the junction line became one of the most significant in the country. It was bought by the Newcastle and Darlington Railway Company, which later became the North Eastern Railway Company. They built and demolished two, successively larger, stations, and the metro now stops in the same place, yet the Brandling Station was untouched.

Opposite the railway building is an empty pub, The Mulberry, and beyond it, terraced houses and some open land which was occupied by flats and maisonettes. Before that, though, this area was within the grounds of Felling Hall, a building which is no longer there.

O’Donnell says that in the mid-16th century, Sir Robert Brandling owned the Hall and grounds, and he built some of 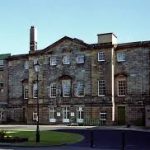 the fortune which his ancestors grew with the colliery and railway. Felling Hall was the family seat for 200 years after Sir Robert’s time.

However, in 1760, one Charles Brandling decided that the house was no longer adequate, and decided to move north across the river to up-and-coming Gosforth. He built a mansion in the village, and the grounds of that house is today known as Gosforth Park, which is open to the public and has a racecourse, a hotel and two golf courses on the land.

When the family moved out, Felling Hall fell into disrepair, and the only part still useable became the Mulberry Inn. The story goes that a Stuart king visited the Brandlings and planted a mulberry tree in the grounds. The pub that stands there now was built on the site of the original inn in the early 1900s.

Everything else relating the family’s time in Felling is gone, although the primary school a minute away from the Mulberry is called Brandling Primary School, and one or two streets in the wider area have the name too. Over in Gosforth, the Brandling Arms pub is still thriving on the High Street, and down the hill in South Gosforth the Brandling Villa pub is a great place to take the dog (or at least ours likes it!)

The Bowes were also significant in the north east coal mining industry, but further across, in County Durham. George Bowes, born in 170 was the son of an MP, and followed in his father’s footsteps, representing Durham as a Whig MP for many years. He was heir to the family estate, Streatlam Castle, but he also inherited Gibside through his mother’s side of the family, and the lands were rich in coal. 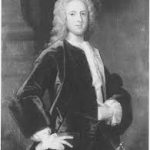 The wealth the family accrued from their colliery helped George secure his position in ‘The Grand Allies’, described as a coalmining cartel. This 18th century group of men controlled the trading of coal throughout the region. They formed partnerships to grow and strengthen their empires, and the majority of coal produced in the Northumberland and County Durham areas came from the cartel members.

George’s daughter, Mary, married John Lyon, 9th Earl of Strathmore and Kinghorne, who was obliged to change his name to Bowes so that he and his wife could inherit the family estates after George’s death. John Bowes took his father in law’s place in the cartel, and grew their fortunes further. As one of the Grand Allies, he was key to their continued success.

In much the same way as the Brandlings in Felling, the Durham group needed to have an efficient way to get their coal down to the Tyne and shipped to London. The Allies opened a colliery at Springwell, which is now part of Sunderland borough, and commissioned George Stephenson to build them a railway. The first section was completed in 1826, with the final link line added in 1854.

John’s grandson, also John (as was his son) was the product of a common-law marriage between his father and a commoner, the daughter of one of the estate’s gardeners. This John, while not declared legitimate, nevertheless benefited from the family collieries. Educated at Eton, he went backwards and forwards to Paris from 1847, buying a theatre and marrying an actress.

His new wife, Josephine, was also an amateur painter and lover of the arts, so the couple decided to build a museum 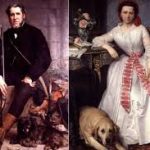 to share artefacts and treasures from around the world with the community back in Teesside. They collected 15,000 objects, beginning in 1862 and ending with Josephine’s death in 1874. At this point, John’s enthusiasm waned and he stopped making purchases.

He died in 1885, but the museum was still being developed by its trustees, and it opened seven years later, attracting 65,000 in 1892 alone. The Bowes Museum is still open today, and has many fascinating items in its collection. Across three floors, there are paintings, statues, ceramics and furniture, just as John and Josephine intended.

Gibside Hall, the ancestral seat of the Blakiston family, was heavily developed by George Bowes, and not just for the coal seam below it. There are 600 acres, which the National Trust, who manages it, describe as: “fashioned with two things in mind: spectacular views and ‘wow’ moments”. The stables have been restored, and there is a neo-Classical chapel, but the estate is not what it once was. 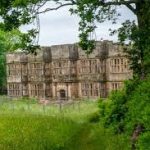 The unfortunate Mary Bowes remarried on the death of John Lyon, but her new husband Andrew Robinson Bowes, was irresponsible, running up debts and neglecting the estate. He also made his wife a prisoner for almost a decade, forbidding her from leaving the house.

They were finally granted a divorce, but before it was finalised Mary was abducted by Andrew, although he was eventually arrested. Mary’s son and grandson did work to revive the estate, and improved the gardens, but much of the furnishings were ultimately sold off.