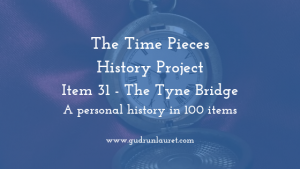 First time on the blog or new to the Time Pieces History Project? Find out what it’s all about here, and then come back to this page for today’s item – The Tyne Bridge.

The Tyne Bridge – Introduction to Item 31 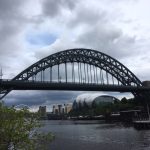 It’s a bit of a cliché I suppose, but it doesn’t seem right to have a project which covers the north east of England without including the Tyne Bridge, which has achieved iconic status and represents Newcastle and Gateshead so well.

I have no idea how many times I’ve been across it, and it probably doesn’t bear thinking about. I’ve sat in heavy traffic on a packed, stuffy bus on an early-morning work commute, driven over on my way to a meeting, and walked over it in both directions at all times of the day and night. I’ve admired it from the metro carriage as I’ve hurtled past it, and struggled to see it on a foggy northern day.

The Bridge has been a proud symbol of Tyneside for almost 100 years, and seen countless thousands of vehicles cross it, as well as around 52,000 participants in the Great North Run. The annual half marathon that goes from Newcastle to South Shields began in 1981 and several members of my family have completed it.

I ran it in 2013 and was overtaken by a couple dressed as the Tyne Bridge while on the Bridge. Interestingly (or not, perhaps), the run was started by an Olympic medallist, Brendan Foster, who taught my mum chemistry when she was at school. Mr. Foster was frequently absent from class, but he was excused as he was training for and competing in the Commonwealth Games.

The History of The Tyne Bridge

Officially opened by King George V in 1928, the Tyne Bridge was the longest single-span bridge in the world at the 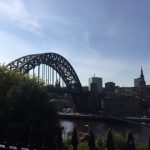 time. It was designed by engineering firm Mott, Hay and Anderson and built by Dorman Long and Co. The green paint was made specifically by Gateshead company J. Dampney Co, and was mixed again in 2000.

The bridge spans 162 metres (531 feet) and the road part is 26 metres (84 metres) above the river. There are two towers at each end of the Tyne Bridge, intended to be warehouses covering five stories. They were never used, although lifts were installed for both products and people, going down to the Quayside. They’ve been closed for years, although my grandma told me she used them to get to work at one point.

The Other Bridges Across the Tyne

As we know, the first bridge across the Tyne was the Pons Aelius, built by the Romans in 122. A stone bridge replaced it in 1270, but it was washed away in a flood in 1771. As both Newcastle and Gateshead grew, and with both sides flourishing with traditional industries such as coalmining and shipbuilding, ways of crossing the river became ever more important. 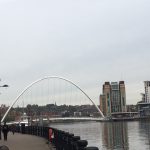 Today, there are seven bridges across the Tyne, with the Tyne Bridge possibly the most famous. The newest is the Gateshead Millennium Bridge, a pedestrian and bicycle crossing which ends at Baltic Square beside the redeveloped Baltic Flour Mill in Gateshead. A competition was held in 1997 to choose the design, and construction began in 1999. The bridge itself, composed of a deck and arch connected by steel cables, was built in Bolton, the frame at Wallsend and the opening mechanism in Sheffield.

The present Redheugh Bridge was built in 1983, and is a lot lower than the other bridges. It’s much further along than the others, too, crossing at the far side of Gateshead towards the Metro Centre. The first iteration opened in 1871, and a reconstruction which disintegrated, was built in 1901. 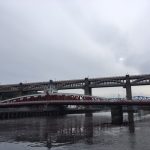 The Queen Elizabeth II Bridge is also known as the Metro Bridge, and opened in 1981. On each side of the bridge are tunnels which connect to train stations in Newcastle and Gateshead. There are two tracks, so trains sometimes pass, and it’s 360 metres long.

The King Edward VII Bridge opened in 1906, four years after work began. It was built in order to ease the traffic on the High Level Bridge. There are stone arches at the ends, and three granite piers support it from the riverbed. The steel girders make it strong enough for the trains moving in both directions.

The Swing Bridge is on the site of Pons Aelius, and is one of only two bridges that moves, although it rotates rather than tilting like the Millennium Bridge. It replaced a previous structure that was too low for boats to move along the river, and opened in 1876. Built of iron, the bridge’s electric pumps are powered by hydraulic engines, and the swinging motion is controlled by the central pivot.

The first ‘modern’ bridge across the river was the High Level, which opened in 1849. It was intended to be dual use, with a railway across the top section, which was designed by engineer Robert Stephenson. 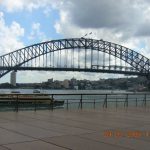 The Sydney Harbour Bridge was also constructed by Dorman Long and Co. and there has been an idea for many years that it was a copy of the Tyne Bridge – it is quite similar, as it’s also in ‘through arch’ style. However, the inspiration for it is believed to be New York City’s Hell Gate Bridge.

The Harbour Bridge is 134 metres (440 feet) high and 48.8 metres (160 feet) wide and is used by vehicles, trains, pedestrians and bikes. The confusion around which bridge inspired the other comes because the Sydney version was completed in 1932. However, work began in 1923, and it took much longer to complete than the Tyne Bridge because of the height and distance it had to cover.

Newcastle’s Quayside, revamped some years ago and with a reputation as a great place to have a night out, tends to get more attention than its cousin on the south side of the River Tyne.

But Gateshead too has seen a revival for its waterfront, thanks to the building of The Sage cultural centre, the Hilton Hotel and the Baltic Art Gallery. In 2018, the By the River Brew Co set up some bars and restaurants in old shipping containers right beside the Tyne, adding to its popularity.

As mining took place across Gateshead, the south banks of the Tyne were equally busy with coal shipments, so much so that merchants from Newcastle wanted to take control of the town. In 1576 they succeeded, when a group of them secured the ‘Grand Lease’ of Gateshead.

As you approach the Tyne Bridge from the Gateshead side, you can take a steep hill down to the river, past the new 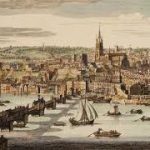 Hilton Hotel. This is Bottle Bank, and it’s part of the first inhabited area of the town. It’s nothing to do with glass vessels, though – ‘bottle’ is a Saxon word for ‘house’ (see also nearby Wallbottle and Shilbottle). Until 1790, it was the only way to get to and from the riverside.

In 1782, Gateshead is included in ‘Whitehead’s Newcastle Directory’ for the first time, and Bottle Bank is the address of 65 tradesmen and other significant locals. The ‘goat’s head’, said by the Venerable Bede to be the origin of the name Gateshead, makes an appearance on a token of a draper living on the hill.

While you’re investigating the Gateshead quayside, pop along and have a look at the HMS Calliope, moored along the Tyne from the Baltic and one of several boats to have this name. Two of her namesakes were gunships, with the second one, built in 1837, decommissioned and made into first a floating chapel (1860) and then a factory (1865).

The Royal Navy Reserve have been operating on the Tyne for 114 years; the first Calliope was a training ship which had survived a devastating hurricane in Samoa in the 1880s. Previously based at Elswick, they made Gateshead their permanent home in 1961. Calliope was the muse of poetry according to Greek legend, so not very watery.