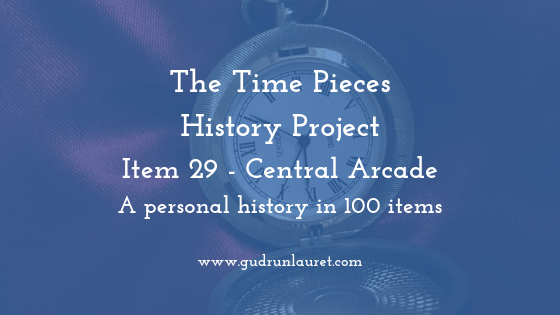 First time on the blog or new to the Time Pieces History Project? Find out what it’s all about here, and then come back to this page for today’s item – The Central Arcade in Grainger Town.

The Central Arcade – Introduction to Item 29 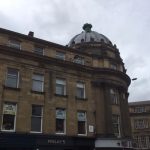 Right in the middle of Newcastle, just beside Grey’s Monument (he of Earl Grey tea), the Central Arcade is hard to miss. Somewhat oddly shaped, it bisects Grainger Street and Grey Street, making it ideal if you want to duck out of the rain on your way across town (Eldon Square is also really good for this!)

I spent a lot of time in the Central Arcade when I was younger, specifically in JG Windows, the music shop, which has been there since 1908.  I was a violin player until my early teens, and was often in there looking at sheet music or sparkly violins I didn’t need. In later years I used to visit the basement with my musician boyfriend, to look at guitars he couldn’t afford, and to buy him guitar strings.

The History of The Central Arcade

The Central Arcade refers to the shopping centre, which was designed by Oswald and Son and built in 1906. It has a 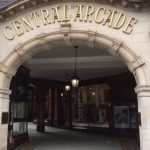 Somewhat confusingly, it looks completely different on the outside, because the shopping arcade is contained within the triangular Central Exchange, which was designed by George Walker and John Wardle to be a corn exchange, although it was never used as that.

Built between 1836 and 1838, Richard Grainger’s magnificent building served as a newsroom before it was converted into a theatre, concert hall and gallery in 1870 by the Institution for Promoting the Fine Arts. In 1897 it became a vaudeville theatre but burned down only four years later. The Central Arcade was built inside the walls.

A balcony runs right round the upper part of the building, and while there is a walkway visible, it has never been possible to get up there during my lifetime. If you go up to the first floor of Windows, you can see tantalising glimpses of the balcony opposite through the windows. It would be great if there was a second level of shops – little independent boutiques would be nice! Currently, most of the shops within the arcade are chain stores, with a large Starbucks taking up quite a lot of the space.

The area around the Central Arcade is often referred to as Grainger Town, because so many of the buildings around 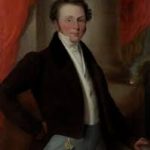 there are down to the imagination of Richard Grainger, a builder born in 1797. The market near the arcade has his name, as does the street which runs down to the Central Station at the bottom end of the city.

He started his building firm with his brother George, and managed it on his own after George died. He worked with some of the most successful architects and town planners of the time, some of whom are also immortalised around Newcastle. His good reputation and great work soon led to him moving in circles with the city’s influencers, and married the daughter of a leather merchant.

In fact, almost all of the streets surrounding the Central Arcade were built by him, and in a period of about 10 years. The Eldon Square shopping centre we know now was built on the site of Grainger’s original construction, which he worked on between 1824 and 1826.

Grainger also built Grey Street, named after the reformer Earl Grey, and the Theatre Royal which stands on it. Designed by John and Benjamin Green (who were also responsible for Penshaw Monument), the theatre was initially completed in 1837, although it was changed completely. It caught fire in 1899, so much of the interior now was rebuilt after that. 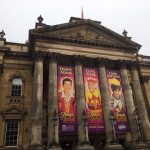 When the theatre opened, The Newcastle Courant wrote about it, saying: “The building itself is most splendid. The boxes and gallery are beautifully embellished with richly gilt ornaments… From the centre hangs a large and brilliant cut-glass chandelier… The alcove off-the proscenium is richly ornamented with rays executed in gold, and over it are the royal arms, richly-gilt. The boxes are lined with rich crimson paper.”

The Grainger Market is opposite the Central Arcade, and runs along most of Grainger Street. It has been open continuously since Richard built it 200 years ago, and in recent years it’s had a bit of a revival. When I was a child I knew it mostly for its butchers’ and greengrocers’ stalls, with a couple of old-fashioned cafes. I also spent a lot of time at Robertson’s bookshop, which sadly closed a few years ago.

Today, it has a vintage clothes shop, a French creperie, and Turkish, Italian, Spanish and Chinese eateries. It’s also home to the Marks and Spencer’s Original Penny Bazaar, where you can buy reduced or out of stock items. Pumphrey’s coffee makers have had a stall there for years, and you can even have a hot drink there now.

There are numerous entrances to the Grainger Market, both from Grainger Street and Nun Street on the other side (also built by Richard). Half of the market is made up of a series of aisles, with stalls on either side. Alleys run between them at intervals, so you can criss-cross your way through. The other half has a huge, vaulted glass ceiling and a wide, tiled walkway through the middle. The shops on either side look almost like railway carriages. 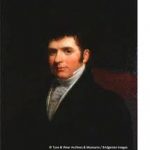 Dobson was an architect and collaborated frequently with Richard Grainger. Born in 1787, his father was landlord of The Pineapple Inn in North Shields and also a greengrocer of sorts. When his son began to show artistic skills, he was apprenticed to an architect in Newcastle.

It was John Dobson who designed Eldon Square, and also the Church of St Thomas the Martyr at the Haymarket, which was completed in around 1827. Soon after, Richard Grainger built St Mary’s Place around it – a street of large buildings. He also has a street named after him. A lesser-known design of his was for part of the interior of Wallington Hall.

He also designed the beautiful station, which was officially opened by Queen Victoria and Prince Albert in 1850. However, at that point, the station was incomplete, and the stone portico with its arched windows wasn’t finished until 1863.

As part of the design, Dobson included a trainshed, which was built of cast iron and is the first example of a multi-arched trainshed in the 19th century. While it looks simple, the structure is actually quite complex, with additional struts used to strengthen it. At first, there was only one platform, but as demand increased, extra platforms were added.

The station is much the same as it was then, although there was a disappointing decision made a few years ago to make the front section, which had previously been used for drop-offs and taxis, into a self-service ticket area. Little coffee shops and a florist popped up, and glass doors were put in at either end. 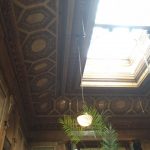 I’m cheating slightly by including The Centurion here, because it’s not in Grainger Town at all. It is, however, the work of John Dobson, and is so beautiful inside I recommend visiting it to anyone who comes to Newcastle. They sell food as well as drinks, so it’s a great place to sit before your train arrives.

Indeed, it was built as the first-class waiting room, opening in 1893. The main bar area is 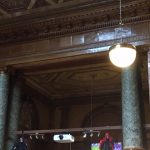 tiled all the way round, with brown arched windows and green-accented walls. The ceiling is even more magnificent – blue-green hexagons of different sizes in a repeating pattern. Even the bar is tiled, with the back section flanked by two large columns.