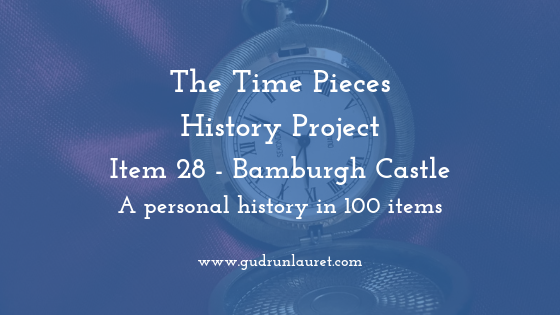 First time on the blog or new to the Time Pieces History Project? Find out what it’s all about here, and then come back to this page for today’s item – Bamburgh Castle. 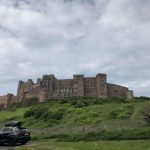 We used to go out and about all over Northumberland and the Tyne Valley when we were kids, piling into my Dad’s Volvo Estate with an uncle or a cousin in tow and walking for hours.

A trip to Bamburgh usually coincided with a visit to nearby Seahouses, where we were rewarded for our trekking with fish and chips. If we were lucky, we’d go over to Holy Island, but as I mentioned in blog 25, we rarely managed it. Instead, we’d go to the beach and slide down the dunes.

The History of Bamburgh Castle

Like much of Northumberland and the north east, Bamburgh has a history going back centuries. The castle has stood for 1,400 years, towering 150 feet above the North Sea and covering nine acres. Still occupied now, Bamburgh Castle was a perfectly-placed stronghold and of strategic importance to kings and noblemen.

The Anglo-Saxons were the first to see the benefits of building in Bamburgh, which was known as Din Guaroy or Din Guaydri, and it became the seat of the Northern kings in around 547. Anglian King Ida (nicknamed the Flamebearer by Welsh poets), was in charge of Bernicia, an ancient region covering what are now Northumberland and Durham, along with East Lothian and Berwickshire.

It was Ida who made ‘Bebanburgh’ (from the Saxon Queen Bebba) a permanent, albeit wooden, structure. On his death, the fortress passed to his grandson Aethelfrith. It was Aethelfrith’s son Oswald who summoned St Aidan to the North. Aidan established a rudimentary church in Bamburgh, as well as the monastery on Lindisfarne.

Then, just as on Holy Island, the Vikings raided the area in the 700s, which, the castle’s website tells us, was a period of bloody retaliation. While the Norsemen went round cracking skulls, the Northumbrian response was to flay their skin and nail it to church doors.

Following a couple of centuries of disuse, William the Conqueror, fresh from setting Robert Curthose up in the 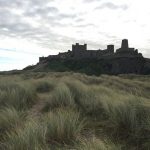 Castle Keep, turned his attention to the castles further north, taking control in 1095. Bamburgh becomes a garrison, used as a base for attacks on the Scottish border.

Over the next four hundred years, the castle land was built upon, creating a residence for a succession of royal heads. It was home to Henry VI during the Wars of the Roses, and was struck by cannons. Friars then acquired the lands, which in turn came under the control of Henry VIII during the dissolution of the monasteries. He sold it to one Sir John Forster for £664 in 1545.

The Forsters did not look after their new home, and it fell into disrepair over the next 100 years or so. The last heir of the family, Dorothy, married Lord Nathaniel Crewe, Bishop of Durham. On her death, her grieving widower resolved to restore Bamburgh Castle to its heyday. The trust he established used the castle and lands to run a dispensary, a school and a hospital amongst other things. It then became the property of Lord Armstrong, whose descendants have worked to maintain it ever since.

By ‘Macbeth’, I mean the 1971 film version, usually referred to as Roman Polanski’s Macbeth, rather than Shakespeare’s play. Macbeth was my GCSE exam set text (I received an A* for my character analysis of Lady M!) and as part of our studies we watched the film too. Polanski used a couple of Northumbrian sites as filming locations, including Lindisfarne as Glamis Castle in Inverness and Bamburgh as Dunsinane.

Roman Polanski is a divisive figure, but his films are often well-received. Macbeth was made only a couple of years after his wife, Sharon Tate, was killed by the Manson Family. Playboy’s founder Hugh Hefner came on board with the project as producer, although he was really the funder. A combination of these two elements led to criticism of the nudity and violence in the film, although over time, it was regarded as a masterpiece. 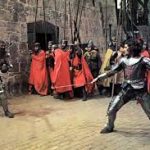 The wilds of Northumberland, particularly on a grey or rainy day, are ideal settings for the story of a man driven to murder through greed and ambition, whose deeds then send him and his wife into madness. The castles help to invoke the sense of creeping fear as Macbeth realises he’s gone too far in his bid to become king. In the final scene, Macduff comes to fight Macbeth in the courtyard of Dunsinane (Bamburgh).

Macbeth fights gamely, but having already been responsible for the deaths of Macduff’s wife and children, he doesn’t really want to have to kill him too. The witches told Macbeth that no man of woman born can harm him, so he’s fairly confident that he’ll be ok. Macduff, though, was born by Caesarean, and stabs the king through the heart. As bloodthirsty teenagers, our favourite bit is when Macbeth’s head falls off and his body falls down the stairs.

Armstrong was the owner of Bamburgh, but in fact he was much more than that. His Elswick works on the banks of the River Tyne manufactured ships, armaments and hydraulic cranes, and employed more than 25,000. Born in 1810, he was Britain’s most successful industrialist, a scientist and an engineer, and was the first man in either of these fields who was granted a peerage.

It was William Armstrong who built the Swing Bridge, one of seven which spans the Tyne and connects Newcastle and Gateshead. He also built the hydraulic mechanism that operates London’s Tower Bridge. A philanthropist, he was part of the founding of the College of Physical Science in 1871, which was renamed Armstrong College in 1901 and eventually became Newcastle University.

He also donated Jesmond Dene to the people of Newcastle, and the vast parkland is still free and a great place to visit. He endowed seven hospitals and donated £11,500 to the building of taxidermist John Hancock’s Natural History Museum, which was completed in 1882.

Armstrong was also an inventor, and his former home Cragside, in Rothbury in Northumberland, is stuffed full of the things he built to make life in the Victorian times easier. After Wallington and the dolls houses, Cragside was my favourite National Trust property.

Built as a villa in 1863, when it was bought by Armstrong in 1869, he had architect Richard Norman Shaw enlarge it 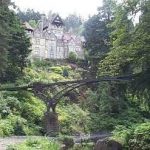 over a period of 15 years. Cragside was powered by hydroelectricity, and had both electric lights and hot showers. There were lifts, a telephone system to connect the rooms and a kitchen spit, which rotated thanks to the electricity which was powered by manmade lakes and underground pipes.

The interior of the house was designed by Dante Gabriel Rosetti and William Morris among others, while the outside mixes Tudor chimneys with Gothic arches. Armstrong and his wife collected plants, and had seven million trees planted in the extensive gardens. They also had a large art collection, amassed over many years.