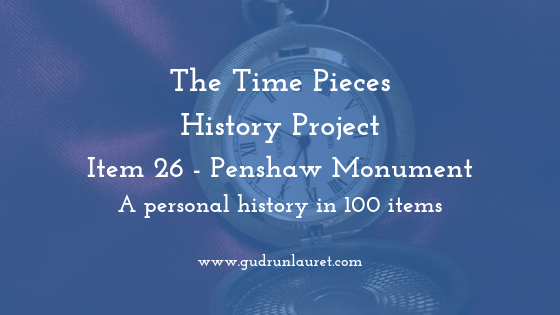 First time on the blog or new to the Time Pieces History Project? Find out what it’s all about here, and then come back to this page for today’s item – Penshaw Monument. 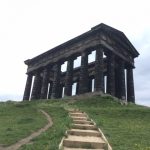 Perched on a hill overlooking the Washington Highway, Penshaw Monument (or to give it its proper title, The Earl of Durham’s Monument) has loomed at me since I was a small child driving past it on the way to or from visiting my Nana, always seeming completely out of reach.

And yet, I’m ashamed to say, I only visited it for the first time a few years ago, when my husband decided it was finally time I went. Following the winding, widely-spaced steps to the top, the view is undeniably breath-taking, with the City of Durham to the south and the villages spread below you. On clear days, apparently, you can see right across to the Cheviots, 50 miles away. Last time we went we took the dog, and she thoroughly enjoyed dragging us up the hillside.

The History of Penshaw Monument

The Monument stands on Penshaw Hill, and the word is derived from ‘pen’, the Celtic word for hill, and ‘shaw’, from the Anglo-Saxon sceaga – ‘wooded area.’ And Hill is just the Old English for ‘hill’, making it rather disappointingly, ‘wooded-hill hill.’ 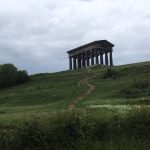 It was designed by John and Benjamin Green to look like an Athenian Temple, the Theseum, and built by Thomas Pratt in 1844. Built from local sandstone and featuring 18 Doric columns, Penshaw Monument is 22 metres (66 feet) high,  16 metres (52 feet) wide and 30 metres (98 feet) long.

It was built in memory of ‘Radical Jack’, or John Lambton, the first Earl of Durham and Governor General of Canada, who died in 1840. Heavily involved in the 1832 Reform Act to give the vote to a wider population, closer to home he also established a support group for retired pitmen, The Lambton Collieries Association.

It would be remiss of me not to mention the legend of the Lambton Worm (pronounced like ‘warm’ is said, not written!) Most children brought up in Tyne and Wear will be able to sing some of the song, which describes in detail the fearsome beast and the brave young man who battled and defeated it. 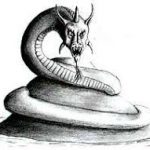 The story goes that John Lambton (not Radical Jack), heir to the estate, decides to skip Sunday church in favour of fishing, choosing not to heed the warnings of an old man he meets on the way. John catches an eel-like creature, which the old man (making an unexpected reappearance) is the devil. John ignores this too, throws the fish/worm into a well and heads off to the crusades.

During his absence, the worm creature gets bigger and, after poisoning the well water, makes a break for freedom. It then embarks on a campaign of terror and slaughter, eating sheep and small children. When full, the monster wraps its tail seven times round ‘Pensher Hill’ – where Penshaw Monument stands today.

John comes home to find his father’s lands devastated and the old man obliged to pacify the worm with daily deliveries of cow milk. Attempts to kill the worm have been unsuccessful, so it’s up to the heir to get rid of him and restore the area to what it was.

Dressed in spiked armour, John prepares to defeat the monster. A witch has told him that when he has defeated the worm, he must kill the first living thing he sees. If he doesn’t, the next nine generations of Lambtons will be cursed and not die peacefully in bed.

He lures the worm down to the river, where its attempts to crush him in its coils fail – the spikes on John’s armour slice it to pieces, and the bits fall into the river and wash away, meaning the worm can’t re-form itself. John blows his horn as a signal to his father to release a dog, who will be the first thing he sees and so sacrificed for the Lambtons. Dad forgets this, though, and runs to his son first. Unable to kill his father, John still kills the dog, but curses his descendants.

Why was Penshaw Terrorised by a Worm?

It seems hard to believe that even in the 13th century people would have been afraid of a worm. If we see ‘worm’ used to mean serpent or even dragon (the Old English word for dragon is worm), it starts to make sense. St George, patron saint of England (who was actually from what is now Turkey), famously fought and defeated a dragon, and we see that throughout history and across the world there are stories of scaly beasts terrorising villages.

These monsters were quite often slayed by good, brave Christians, and in the Bible they represent evil and something 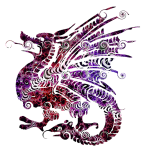 to be defeated – as John was able to do after defending his religion during the Crusades. Dragons were responsible for all kinds of disasters and unexplained natural phenomena, as well as mass murder.

Dragon stories, though, go further back than even the Crusades. ‘Drakons’ (meaning ‘sea serpent’ or ‘large serpent’) were frightening ancient civilisations too. Egyptian sun god Ra had a serpent nemesis known as Apep, 48 feet in length and the bringer of destruction and chaos.

The Mesopotamian region had ‘mushussu’, who was almost like a familiar for their gods, and lived in a palace. Daniel (of lions’ den fame) was challenged to pit his god (Yahweh) against this living representative of the Babylonian gods. Daniel cheated and poisoned the mushussu, thereby introducing early Christianity to the area.

Interestingly, in the East, dragons are not enemies but knowledgeable and even friendly creatures. They would in fact ward off evil beings, protecting the humans around them. Their blood was believed to have magical powers, including the ability to see the future. Eastern dragons were able to shape-shift and even take human form.

Magnificent as the views are, and as lovely as Penshaw Monument is, it doesn’t really serve a purpose, and never really has. Although it was once the venue for a very small music festival about 15 years ago.

Attractive but useless structures are not uncommon, and their sole purpose is to look pretty. According to the Folly Fellowship (yes, that’s a thing), a ‘folly’ is a building that’s attractive but not habitable. It should, however, look like it could be lived in – with a roof and the remains of doors and windows. If it doesn’t, it’s not strictly a folly. 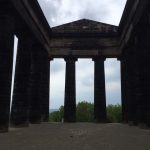 The website then goes on to define different types of folly we might come across. It would seem that Penshaw Monument is a ‘Belvedere Folly’: “A building designed to be climbed to take in the view, sometimes in the form of a temple.” Admittedly you can’t climb the Monument itself, but a Belvedere is often on top of a steep hill, which Penshaw is.

There are all kinds of other follies, which feels like it could be a good side project to start. These include ‘tortoiseries’, which are either built in the shape of a tortoise or to house a family of them. There are also decorative cottages known as ‘ornes’. Oddly-shaped, with conical thatches, they were often built to look like rustic cottages, and could be decorated by the ladies of the estate as playthings.