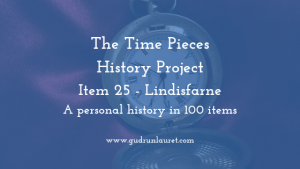 First time on the blog or new to the Time Pieces History Project? Find out what it’s all about here, and then come back to this page for today’s item – Lindisfarne. 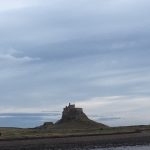 We used to visit Lindisfarne, also known as Holy Island, quite a lot when I was a kid. In the pre-internet days, we used to drive to Bamburgh and ask at the post office for the crossing times (Lindisfarne is only accessible via the causeway from the mainland for a few hours a day). I’ve no idea why we didn’t just ring the post office before we set off on the 50-mile drive…

The largest of the Farne Islands and one of three which is accessible (there are 28 in total), Lindisfarne is 1.5 miles (2.4 km) north to south and 3 miles (4.8km) east to west. While it has a permanent population of only 160 people, it receives 650,000 visitors every year, many of whom stay in one of its five hotels or rent a holiday cottage.

The History of Lindisfarne

The Anglo-Saxons named the island, which became a religious site when the first monastery was built in 635AD. St Aidan (from the old Irish Aedán – ‘Little Fiery One’) came from a monastery on Iona and reintroduced Christianity to Northumbria.

Aidan was sent by King Oswald of Northumbria, who disapproved of the Anglo-Saxon paganism. He was a replacement for Bishop Cormán, who claimed the Northumbrians were too stubborn to be converted. Aidan had more luck, as he built monasteries and churches throughout the region. He also built schools and gave to 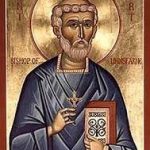 This ‘Golden Age of Lindisfarne’ was followed by the era of St Cuthbert, who proved to be equally popular. He arrived on the island in 665, having been converted some 14 years earlier after a vision of St Aidan. Cuthbert stayed on Lindisfarne for around 20 years, becoming bishop in 684.

At the end of 686, Cuthbert headed back to his hermitage on Inner Farne, where he died a few months later. He was buried on Lindisfarne, but was later disinterred, and his remains are now at Durham Cathedral.

The monastery at Lindisfarne was the target of the first recorded Viking raid in 793, although the island itself was visited by a group of Norsemen in 787, who killed the reeve sent to escort them to the king. Religious sites were often attacked, and the clergy described the Norsemen as ‘a most vile people’, which was not how they saw themselves. The Norse people considered raiding honourable, where the victor of battle claimed the spoils of war.

They were very good at it, because they had superior ships and were committed to raiding across Europe. Theft, on the other hand, was frowned upon, and their own mythology taught the Vikings that thieves would be tormented after death. The raid on Lindisfarne saw the deaths of many monks and the looting of the church treasures. Despite this, the religious community survived, and they erected a ‘Domesday Stone’ to commemorate the event.

After that, the Benedictine period and the second monastery lasted from 1066 (after the Norman Conquest) until the dissolution of the monasteries by Henry VIII in 1536. A smaller St Cuthbert’s Church was built in the 19th century after several Lindisfarne locals became Presbyterians the century before.

You can visit St Cuthbert’s Chapel on Inner Farne, built in the 1300s over the cell from where he dispensed his blessings, and updated in the 19th century. Also on the Island is a pele tower, which is a fortified building designed for defence and built along the Scottish border in the mid 14th century.

The word ‘pele’ describes an enclosure where livestock were put when there was danger – animals were of course targets of border raids. The towers were constructed in one corner of the enclosure. This pele tower is known as Prior Castell’s Tower. Prior of Durham between 1494 and 1519, Thomas Castell was in charge when the tower was constructed and it was used as accommodation for the monks on the island. It became a garrison after the monastery dissolution.

The Captain of the Islands complained to Queen Elizabeth that the tower was falling down, and she agreed to have it updated in 1566. However, barely 80 years later the military had abandoned it, and it was unused until it served as a rudimentary lighthouse in the 1700s (which was then replaced by a proper lighthouse structure). From the 1840s it was used as an occasional residence by the Durham Archdeacons.

Lindisfarne is also famous as the home of fortified honey wine, which for many years could only be purchased on the island. Made with fermented white grapes, honey, herbs and water from the island’s artesian well, Lindisfarne Mead is so popular that St Aidan’s Winery attracts 200,000 annual visitors. I personally don’t like it, but don’t let that put you off!

In recent years, pink, dark and spiced variations of mead have been added to the range, along with many other honey flavoured or infused products. However, the medieval monks making it had a serious purpose for it – it was believed that the mead fortified the body so the soul could be in God’s keeping.

As well as fortified wines, monks throughout history have been brewing their own beers, something that is quite common in Belgium, where my brother lives. There are six monasteries in Belgium (including Orval and Chimay) and two in The Netherlands which make what is known as ‘trappist’ beers – the term given to a group of monks who are part of the Order of Cistercians of the Strict Observance (from La Trappe Abbey, in France).

The trappest monks lived in isolated silence, surviving on a meagre diet and manual labour, and expected to be self-sufficient. Nevertheless, they managed to brew their own beer, with the Abbey having a brewery in 1685. Originally, 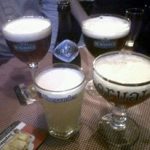 the beer was designed for the local community, and now it’s sold to cover the monks’ living expenses.

There are some rules around the brewing, including that is not the primary focus of the monastery and not for profit. As well as living expenses, it covers maintenance works for buildings. And it must be brewed within the walls of the monastery, and if not by the monks themselves, then with them supervising the process.