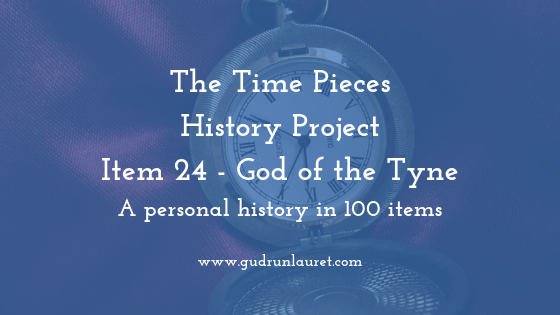 First time on the blog or new to the Time Pieces History Project? Find out what it’s all about here, and then come back to this page for today’s item – God of the River Tyne.

The God of the River Tyne – Introduction to Item 24 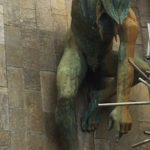 This statue has hung on the wall of the civic centre in Newcastle upon Tyne as long as I can remember. I don’t go up to that end of town very often now, but we did when I was little. According to my mum, we used to visit wholefood restaurants there, one of which was selling the mask from blog 16!

As a child, I was really quite scared of him – he’s huge, naked, and looks quite cross. If you stand directly underneath him, the gigantic forefinger points right at you while he looks balefully from under his fringe. The green and brown tinge to his body, probably from rain water dripping down over the years, doesn’t help.

The History of God of the River Tyne

The civic centre is at St Mary’s Place at the Haymarket end of the city, so you can visit the river god and pop into the church of St Thomas while you’re there. Newcastle is full of statues, and it would be an interesting blog in itself to go round and map them all.

A post from local blogger Icy Sedgwick explains that the Council commissioned sculptor David Wynne to cast the river god in bronze in 1968. She adds that the god of the River Tyne was also represented in mask form on the side of Somerset House in London in 1786.

The mask, with mining motifs, was displayed along with seven others for seven English rivers, and one for the sea. Somerset House, owned (unsurprisingly) by the Duke of Somerset, stood on the River Thames when it was first built, and now houses an art gallery.

So, why would the River Tyne be depicted as a floppy-haired god and exhibited as far away as London? Large bodies of water were often of great significance to the communities that lived around them, and the Tyne was no exception. Water deities were worshipped to keep them happy and appeased, and they can be found across the world. 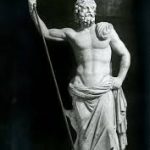 In Greek mythology, there were a lot of different gods, demi-gods and nymphs, with the most famous being Poseidon (Neptune in the Roman canon). Often depicted bare-chested (well, a shirt would get wet), with a fish tail and holding a trident, Poseidon is the lord of the sea.

Oceanus, chief god of all the waters, was shown as an old man sitting in the sea and pouring out water. Confusingly, Nereus is known as the old man of the sea, although his biggest contribution was as the father of the Nereids, 50 sea-nymphs who lived in a grotto at the bottom of the Aegean Sea.

Frequent companions to Poseidon, they were the protectors of fishermen and sailors, and came to the aid of those in need. They were depicted as beautiful young women, often riding dolphins. Their collective name comes from both Nereus and the Greek word for wet, ‘nêros’, so they were also known as the ‘Wet Ones.’

The Celts, too, had water gods. One charming young chap, Angus Og, lived in his palace on the banks of the B 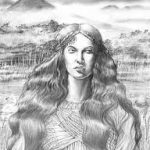 oyne (ok, not *strictly* a water deity!). The god of love, beauty and youth, his kisses turned into birds that carried love messages, and his harp playing was irresistible. Sigh.

His mother, Boann, defied a ruling that said only her husband, Nechtan, and his servants, were allowed to visit Sidhe Nechtan, the sacred well of knowledge. The water within became a raging river which pursued her. Depending on which version you read, she was either drowned or outran it, but it became the Boyne and Boann its goddess.

The History of the River Tyne

The River Tyne, as we’ve seen, has been significant since Roman times, although its origins go back 30 million years ago, when the water began to carve a path through chalk rock. The gradient fluctuates in several places, and the base level has been recorded at 35 metres below sea level on the south side.

From the Tyne Rivers Trust, we learn that it’s 73 miles long and comes from Garrigill at the North Pennines on the South Tyne, and at the Cheviot Hills by Kielder as the North Tyne. These two rivers come together at the imaginatively-named Watersmeet, beside Hexham.

The origins of the name ‘Tyne’ seem to be lost, and it was first used around the time of the Saxons. One suggestion is that an early Celtic or pre-Celtic language used the word ‘tin’ to mean river. Another theory put forward is that it comes from ‘tei’ – ‘to flow’ in pre-Celtic language. The Roman river ‘Verda’ may refer to the Tyne, but it could also be the Wear, which is only a few miles away.

The River Tyne was used for transporting coal from the 13th century onwards. Coal staithes (a structure at the side of the river, for ships to dock and unload) were built all along the river, with two of the largest down the road in Hebburn in one direction and Dunston at the other – the latter are still standing over 100 years on.

The Boldon Book of 1183 refers to a miner providing coal for an ironworks inland at Bishop Auckland, but mining along the Tyne was easier, as they didn’t have to go down too far for the seam. Siting the mines here also meant getting it to the boats was straightforward, and coal shipping to London began in 1305.

Only 70 years on, coal from Newcastle was travelling across Europe, with an estimated 15,000 tons being moved every year, making the town (as it was then) the fourth richest in the country and the most significant port. Although ports at places such as Sunderland, 14 miles south, eventually rivalled that of Newcastle, it continued to be important until the railways became the dominant method of transportation.

Across the north east, monks were often involved in mining – the port at North Shields was established in 1225 by Prior Germanus of Tynemouth Priory, and in Durham the monks owned pits in the 1350s, at Rainton and Ferryhill. Both Edward I and Edward III got involved to protect the Newcastle port – Edward I had the jetties at North Shields taken down, and Edward III banned Tynemouth and Durham monks from unloading coal.

The building of wooden boats began in 1294 in Newcastle, when a galley for the King’s fleet, and in 1346 in Sunderland, when Thomas Menville was recorded as a shipbuilder. The town cemented its position as the biggest centre in the country over the next 500 years, and in 1840 it had 65 yards. Ten years on from then, over 2,000 shipwrights worked in the yards, and around the same number worked in related jobs.

Palmer’s Shipyards began in Jarrow in 1851, and Swan Hunter came about in 1873, when Charles Swan was given a failing yard by his brother in law. He started a partnership with George Hunter of Sunderland. Harrisons, Wood-Skinner and Boutlands were all shipyards in Bill Quay, where my Nana’s family are from.