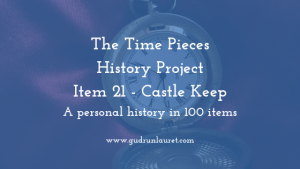 First time on the blog or new to the Time Pieces History Project? Find out what it’s all about here, and then come back to this page for today’s item – The Castle Keep.

The Castle Keep – Introduction to Item 21 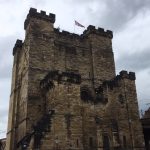 Everybody has an object that makes them feel like they’re ‘home’ when they get back to the North East, even if they’ve only been away for a day. For some it’s Antony Gormley’s Angel (personally not a fan at all), and for others it’s the long, green sweep of the Tyne Bridge.

For me, though, I prefer to see the Castle Keep. It’s not huge, but it looms over the bottom part of the town, casting shadows on bright days and standing out in the gloom of a Northern autumn. Although it’s not the very first structure to stand on the hill, it’s the reason the city has its modern name, and it’s more than old enough to have a rich and varied history, which, as you can imagine, is right up my (cobbled) street.

The History of The Castle Keep

The Castle Keep stands above the River Tyne, and the NewcastleCastle website tells us that the earliest fortification on the site was built by the Romans to guard the bridge across the river – a fort known as Pons Aelius (Hadrian’s Bridge). The bridge itself stood where the Swing Bridge is today.

Although abandoned when the Romans left, the fort site became part of an Anglo-Saxon church in the 800s. The settlement there was known as Monkchester. After the Norman Conquest, William gave the land to his eldest son, Robert.

In 1168, Henry II ordered the timber castle to be rebuilt in stone. Maurice the Engineer (yes, really) completed the 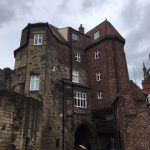 In Henry III’s time, the castle defences were reinforced by a barbican (walled entrance) with a portcullis to allow or prevent entry to the castle, and a gatehouse with a drawbridge manned by soldiers. This section of the Castle Keep is now known as the Black Gate.

So, who was the oddly-named Robert Curthose? Eldest son of William the Conqueror, his nickname apparently came about because he had short legs as a child (in Norman French, ‘Courtheuse’ – ‘short stockings’).

Born in either 1051 or 1054, the young Robert is described as ‘skilful in military exercises, courageous, but lazy and with a weak character.’ He didn’t have a very good relationship with his younger brothers, William Rufus and Henry. He also felt he should have more power than he did. 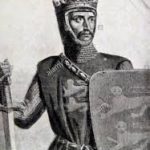 His relationships with the rest of the family continued to be fraught. In 1077, his brothers tipped a full chamber pot over his head from a gallery above him. Unamused and dismayed that his father didn’t tell them off enough (at this point they were all grown men!) Robert decided to revolt against William.

An unsuccessful attempt to capture Rouen Castle led a battle with William’s men, and the prince fled to Flanders. Two years later he unhorsed his father in battle, and only avoided killing him when he realised who he was. This prompted his mother, Queen Matilda, to bring about a truce.

The tentative peace between father and son was sufficient to persuade William that he could trust Robert to deal with Scottish raiding parties, who were crossing the border into Northumberland. On the Roman site, Robert built his New Castle upon the Tyne ‘Novum Castrum Super Tynam’ – today’s Castle Keep.

Incidentally, Robert continued to fight with his brothers, double-crossing them, amassing armies to march against Henry and mortgaging his own duchy (he became Duke of Normandy after the death of his father). In 1106, Henry defeated Robert in battle, claimed the duchy and imprisoned his older brother in Devizes Castle for 20 years. From there, he was moved to Cardiff, and died at the castle there in 1134, aged 80-something.

William the Conqueror’s victory, is, of course, immortalised on the Bayeux Tapestry, which is actually not a tapestry at all. There are nine panels of linen, each painstakingly embroidered with fine stitching. It measures 68.3 metres in length and is about 50 centimetres high.

Originally credited as a labour of love by William’s devoted wife Matilda and her ladies in waiting, it’s now believed 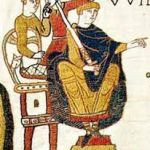 that is was done by Anglo-Saxon embroiderers. It was made a decade or so after the battle, commissioned probably by Bishop Odo of Bayeux, who also makes an appearance on the tapestry.

It’s very much a piece of Norman propaganda – Harold is shown as disloyal, petulant and greedy. As soon as Edward the Confessor died, he snatched the crown, despite having promised both the old king and the duke that he would support William’s succession to the throne.

While Harold’s betrayal is carefully documented on the tapestry, there’s no mention, however, of his decisive defeat over the Norwegian Harald Hardrada. Nor does it mention the fact that, having marched all the way to Stamford Bridge, he and his army had to head back down south to fight the Normans and French (not the same thing at that time) three weeks later.

During the French Revolution, the Tapestry narrowly avoided being cut up into wagon covers for soldiers, and was first displayed in 1812. It’s moved around a bit, but it’s now on display in its own museum. However, discussions have been ongoing for it to visit England, so keep your eyes peeled for that (and away from arrows!)