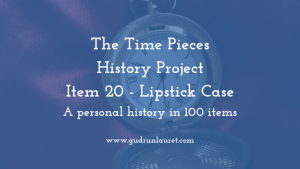 First time on the blog or new to the Time Pieces History Project? Find out what it’s all about here, and then come back to this page for today’s item – the lipstick case.

The Lipstick Case – Introduction to Item 20 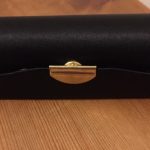 This lipstick case represents the one carried by my ‘adopted grandmother’, Margaret, in her handbag. You met Margaret’s husband, Dennis, in blog 14, and the two of them had a big impact on my formative years.

When I was little, I went all over with Margaret – standing beside her chair at the hairdresser’s, to the shops, to visit her Great-Aunty Kitty, to the Salvation Army meetings (she was Catholic, but we went with her neighbour Joan). Everywhere we went, Margaret took great delight in telling people “we’ve had her since she was six months old”. Family history suggests I was probably closer to 18 months, but never mind.

Margaret would go and get her hair ‘done’ every two weeks, and she’d check it in the mirror of the lipstick case. She didn’t often get dressed up, although when we went to the big city (Leeds) she made a bit of an effort. Mostly I remember car trips to Scarborough and Brid (Bridlington), sitting in beer gardens on sunny days and horrifying everyone around me by sucking the lemon slice in my lemonade.

The History of The Lipstick Case

There doesn’t seem to be much information on how the cases themselves came about. The National Museum of

American History has one in its collection dating from 1942, which was gold in colour and designed to look like a gun shell. Nice.

Clearly, having your lipstick and mirror in one handy box makes it easier to find in your handbag, and application and touch-ups can be done quickly. I’ll have to do some more digging to see what else I can find out.

The History of Lipstick

Unsurprisingly, there’s a lot more information about this than the cases to carry it. Approximately 5,000 years ago, crushed gemstones were used by both men and women of ancient Sumer to decorate their lips and eyes. 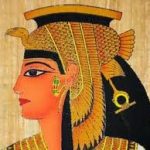 The Ancient Egyptians used lipstick to indicate their status, with both sexes wearing it. This was made with bromine mannite and iodine, which made them rather unwell. Excitingly, they also invented shimmering lipsticks, using a substance in fish scales.

The Greeks were also busy poisoning themselves, using vermilion and crushed mulberries. The wearing of lipstick was originally confined to prostitutes, but the upper classes took it up eventually. And the Chinese, who’ve invented most of the good stuff, produced a beeswax version to protect the lips 1,000 years ago.

From there, Queen Elizabeth I popularised the red lip (and white face) look, although in the 16th century, only male actors and women wore makeup. As time wore on, makeup was considered unseemly and associated with undesirables (again, prostitutes and actors), and this view remained until the end of the 19th century.

In 1844, Guerlain (the perfumiers) manufactured commercial lipstick, which was wrapped in silk paper, with the familiar cylinders invented by Maurice Levy in 1915. By the 1920s, painting lips was common with most women, who used stencils or Helena Rubenstein’s version, both of which would help them achieve a cupid’s bow.

As well as making lips brighter and bolder, a pout has also been in recent years. A recent scare story in the media reported that teenagers were gluing their top lip to their face to make it look bigger, but that’s not as bad as some techniques.

Perceptions of beauty vary from civilisation and throughout history, and it’s hard on the women (and men) if they don’t match up to the ideal in the place and time they find themselves living.

Apparently, lip filling was originally analogous fat injected to help patients with facial deformities caused by tuberculosis. It quickly became more about appearance, though. In the early 1900s, surgeons injected paraffin to plump up lips, but this was sadly ineffective. Then, they began to use silicone, which was popular until about 25 years ago.

Belladonna, or deadly nightshade, was used for centuries for different purposes. The Ancient Romans used it as a 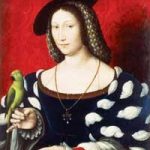 poison, either on arrow-tips or added to drinks. In the Middle Ages, it was used as an anaesthetic.

And of course, it was used as an eyedrop by Renaissance women, to dilate the pupils and make them look more alluring. Unfortunately, belladonna is one of the most toxic plants in the world, and side effects caused by ingesting it (and presumably dropping it in the eyes) include hallucinations, convulsions and a rash.

As we’re talking about lipstick, it seems only right to mention the humble cochineal beetle, or Dactylopius coccus, which has been crushed throughout the years to colour everything from lipstick to Mr Kipling’s pink French Fancies.

People are often surprised to learn that cochineal is still used, and while manufacturers sometimes use beetroot as a red or pink colouring, carmine comes from beetles more often than not.

And as well as a food colouring, cochineal has been used in making lipstick and other types of cosmetics, and still is. The insect is native to parts of America, and eats cacti. 7,000 of the females are required to make one pound of dye, and they are killed by heating them in the oven or plunging into boiling water. Seems like it’s not just women who suffer for their art!