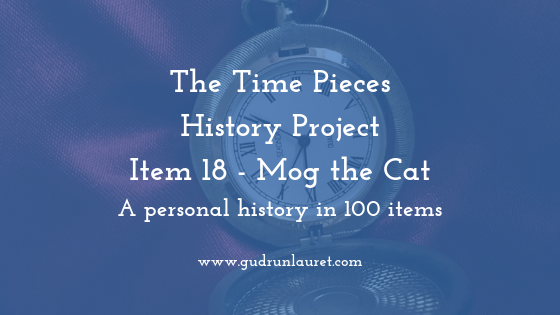 First time on the blog or new to the Time Pieces History Project? Find out what it’s all about here, and then come back to this page for today’s item – Mog the Cat.

Mog the Cat – Introduction to Item 18 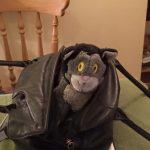 This Mog the Cat belonged to my baby brother, Ed, and he carried it around with him by the tail everywhere he went. While I never played with it, I DID read the Mog books – in German. I’ve read Mog and the Baby so many times now that my Dad and I still use some of the quotes from it between ourselves (yes, that’s probably weird).

In more recent years, Mog the Cat has been the companion of our wonderful goddaught 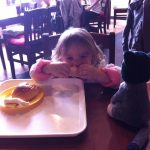 er, Adi. I looked after her quite a bit before she started school, and Mog came on many of our adventures, hiding in my bag until we got to the farm or museum. He’s been designated “a naughty cat” now, who eats chicken pizza and roams the fields at night.

I think Adi is probably a bit old for him now, but she still asks after him, and she’s only just, I think, getting to the age when she doesn’t believe what we tell her about Mog. Maybe another child will enjoy him, or he’ll get to enjoy his retirement!

The History of Mog the Cat

Mog was created by German children’s author Judith Kerr, who died earlier this year. The family Mog lives with, the Thomases, is based on her own, with Debbie and Michael given the middle names of her two children. Thomas was the given name of her husband, the screenwriter Nigel Kneale. 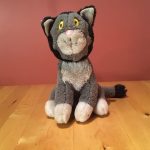 Rather confusingly, in the German versions Mog is ‘der Kater’, suggesting he is male, and we’ve always regarded him that way. In the English editions, Mog is apparently female, and even has kittens of her own. I’m using both he and she for this post!

First published in 1970, the 17 books recount Mog’s adventures, with and without her human companions. He often gets into trouble, but always ends by winning the day. In ‘Mog and the Baby’ (‘Mog und Das Baby’), Mrs Thomas looks after her friend’s baby, who torments the cat.

In a fairly unlikely conclusion, Mr Thomas and Debbie narrowly avoid running the baby over; he is saved unintentionally by Mog, who knocks into him while going the other way. Mog, of course, is bumped off in Kerr’s final story (not including the 2015 Sainsbury’s tie-in), which seems a little hard on his young fans.

As well as the Mog books, I loved ‘The Tiger Who Came to Tea’, mostly because it’s such a bonkers premise for a book. When I was a little older, though, I came across ‘When Hitler Stole Pink Rabbit’, the first in the trilogy of books which were semi-autobiographical.

At aged ten or so, my understanding of the Second World War and its impact on the everyday citizens of Germany, 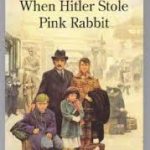 particularly the Jews, was, unsurprisingly, hazy. Anne Frank was still unknown to me at that time.

This book, then, was my introduction to what it was like to live through a war. Kerr’s vivid descriptions of Anna’s sense of dislocation and otherness were uncomfortable and all too real – the family escapes first to Switzerland and then to France, where our heroine is baffled by the school system and making friends.

The Guardian describes ‘When Hitler Stole Pink Rabbit’ as a children’s book with adult themes, with the parents struggling both with the practicalities of being constantly on the move, and their ultimate isolation in England, where they can’t communicate with anyone.

As an adult reflecting on the book after (ahem!) 25 years, I can appreciate all the nuances more, and I feel I should reread it, and purchase the other two books as well. As an aside, another book which was ostensibly for children but discussed grown-up things was the devastating, moving ‘Brother in the Land’, by Robert Swindells. If you think nuclear war may not be too bad, then you need to read this.

Kerr’s cat is not the only famous Mog on the block. Helen Nicoll’s Meg and Mog debuted two years after the first one, and 140 books and 47 years later, they’re still popular.

They’re very different though – Meg is a witch, and this Mog is her familiar. The books, and the animated series which came later, follow the pair as the hapless witch finds her spells going wrong, and they’re occasionally accompanied by the imaginatively named owl, Owl. 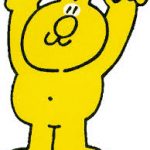 Henry’s Cat, broadcast on BBC during the 80s, was a firm favourite of mine. The yellow cat was accompanied by his (blue) friend Chris Rabbit, a large cut-out of which was inexplicably displayed in the window of a branch of the Woolwich in York (if anyone knows why, please let me know!) He and his gang have all sorts of adventures, occasionally thwarted by Farmer Giles, or the malevolent Rum Baa Baa, the criminal genius sheep.

Despite enjoying all these shows and books, I actually don’t like cats very much! I’m very allergic to them, which doesn’t help, but there are three books I read that contributed to my distrust (and sometimes, at night, fear!)

The first was a story in a collection of fairy tales which concerned the King of the Cats. Tom Tildrum is a large, black 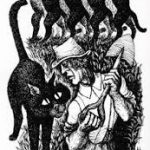 tom cat who is chosen to be king after the death of Tim Toldrum. So far so good, except the book was illustrated with pictures of cats in hooded robes, walking on their hind legs and calling for their new king.

And as if that wasn’t bad enough, I was also the unfortunate owner of Millions of Cats, an American children’s book, written by Wanda Gág in 1928. An old man goes off to find his wife a cat, and, unable to choose just one, ends up with millions of them, in his pockets, under his hat and following him home. 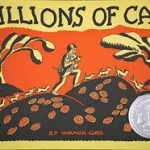 The wife doesn’t fancy the responsibility of all of these cats, so she suggests her husband chooses the prettiest one. The cats then start to fight amongst themselves over which of them that might be, causing the couple to retreat to their farmhouse. When they venture forth at last, there’s a bloodbath in their yard and only one cat left. Apparently, this is an enchanting tale and a family favourite, which I find hard to believe.

The other story, in case you’re wondering, is The Black Cat, a short story by the master of the macabre, Edgar Allan Poe. I won’t spoil it for you, but as you can probably guess, the cat is not a nice one!