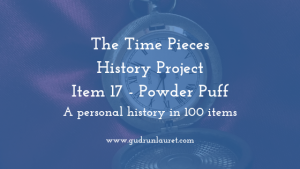 First time on the blog or new to the Time Pieces History Project? Find out what it’s all about here, and then come back to this page for today’s item – the powder puff.

The Powder Puff – Introduction to Item 17

My Nana, who made an appearance in blog three, loves little rituals – the more luxurious, the better. When I stayed over as a little girl, her husband (not my grandfather) used to bring us a breakfast in bed of tea, dippy eggs and toasty soldiers, which we ate sitting propped up by pillows. 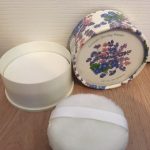 Fast-breaking over, it was time for a bath. I used coarse, brown seaweed soap and splashed about pretending to be a mermaid. My Nana gave me my own mermaid name, which I promised never to reveal.

Then, I would be wrapped in a big, fluffy towel to have my hair combed. The highlight of the experience was fetching the pink “princess powder puff” to be puffed all over with fragrant talcum powder. Nana was so excited to hear about my history project that she donated this puff to be photographed.

The History of The Powder Puff

Information on the origins of the puff are fairly sparse. Intended for the application of powder (obviously), they were originally made with fleece, cotton and down, before being made with synthetics. It’s important that they’re good at holding the powder, so it can be dusted evenly. 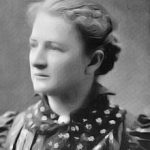 the puff. She ran her own business, where she manufactured household goods and clothes, but she also created a number of her own objects.

Her first powder puff was a small, drawstring bag, perforated at the bottom for even distribution. Some of her other inventions include knee-high boots, the Dart needle, a corset shield, a manicure case and photograph albums. Some were only seasonal, novelty goods, but she also refined and improved on others’ inventions.

I couldn’t resist including this here, because it’s an excuse to explore the frankly bonkers things women used to do in the name of perfection. The Romans used vinegar and chalk to make creams, followed by a powder of ground orris root (part of the iris family).

The Ancient Chinese applied their dinner to their faces, with rice powder the smoothing tool of choice. In Egypt, while many women contented themselves with clay, Cleopatra’s quest for eternal youth saw her applying crocodile poop to her face.

As we know, lighter skin was often regarded as a sign of wealth and status – darker skin was caused by working in fields under the hot sun and without any means of shading the face. Even today, many Asian countries still promote skin whitening and lightening products. 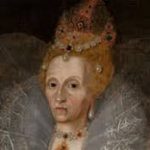 Elizabeth I in later years, with sunken cheeks and pox-ridden skin.

In the Middle Ages, the preferred look for women was pale, with both hairline and eyebrows plucked. Gruesome. Flour and lye, a natural bleach, would get rid of any perceived imperfections.

While Elizabeth I is probably the most famous, if frightening, wearer of the white-lead-and-vinegar face paint, she wasn’t the only one – Shakespearean actors were also caking themselves in ceruse, as it was known. Those who didn’t die from lead poisoning caused irreparable damage to their faces.

It took some time for it to dawn on people that the powders and unctives they were using were causing damage, but it did eventually, and more natural ingredients were used as time went on.

Of course, it wasn’t only women who were liberally dusting themselves with poison. In the French courts, particularly, huge, powdered wigs, known as perukes, were popular with men too. My Nana is particularly interested in this period in history, and even studied for her master’s in the history of fashion when I was a child.

Apparently, the wig trend was mostly due to syphilis – hair loss was common with sufferers, and rather than be embarrassed in public, they opted to hide their heads with false hair. Often made from horse or goat hair, the wigs didn’t smell too pleasant, so orange and lavender were used to mask the pongs. 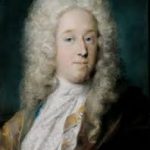 In 1655, the then 17-year-old Louis XIV found his hair was thinning. To save face (and head) he started wearing wigs. His cousin Charles II of England followed suit five years later, although in his case he was going grey. There is a theory, however, that both of them were also recovering from syphilis.

But why the powder? Well, mostly because it was fashionable, and also, as we’ve mentioned, because of the bad odours. Lice were also common in the 17th century, because people didn’t wash, and the powder was thought to put them off living in the wigs.

An average wig cost 25 shillings, and the bigwigs (yes, that’s where it comes from!) could go for up to 800 shillings. After some digging, I’m estimating that as £400 in today’s money. Please note, maths is not my strong point, so I could be wrong! It’s no wonder, then, that the popularity of the bouffant hair began to wane.

Until I started my research for this post, I’d never even heard of powder puff sports, which sounds more offensive than it is. The term refers to activities traditionally associated with men, but played or done by women. They aren’t without their critics, though, with many saying it enforces gender roles.

The first (US) football game played by women happened in 1931, at Western State College of Colorado, but it wasn’t until 1945, when Eastern State Teachers College in South Dakota didn’t have enough men to field a team, that it really becamea thing.

Keen not to miss out on homecoming, the co-eds got together 23 women and played a game, which they didn’t take too seriously. The local paper described the two teams as the Rouge Elevens and the Powderpuffs. The women, expecting to be mocked, started the joke first, applying makeup at halftime.

Since then, it’s become more popular across America, with many teams raising money for charity through their games. They also get the whole school involved, with men performing as cheerleaders, and it’s not seen as too competitive.

Merriam-Webster: Powder puff
Makeup: History of Face Powder
The Book of Everyone: The Bizarre History of Powdered Wigs