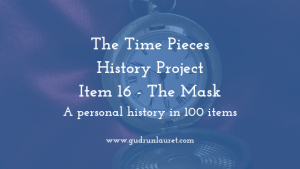 First time on the blog or new to the Time Pieces History Project? Find out what it’s all about here, and then come back to this page for today’s item – the mask.

The Mask – Introduction to Item 16 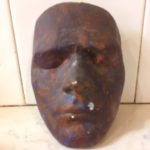 Yet another random object from my childhood, this mask has adorned one wall or another in every house we’ve lived in since I was tiny. To the best of my knowledge it isn’t especially significant, but I like it anyway. It’s definitely preferable to the monstrosities my dad brought home and painted red when I was a teenager.

The laughing face was in the hall, and the wild-haired, manic one was on a wall on the backyard. One night I went down to get a glass of milk from the fridge, and, not knowing it was there, screamed the house down when I spotted a grinning, floating head looking at me through the kitchen window.

The History of the Mask

It turns out that masks are used for a whole host of reasons, depending on when and when they’re worn, and have a long and fascinating history. The earliest mask found dates from 7,000 years ago, and it would have been used in a ritual of some sort. As they were usually made of wood or leather, it is possible that masks are older still, but no examples survive.

Yet again, the Chinese have been using masks for centuries, in shamanic rituals, exorcisms and in funerals. A mask may also make an appearance in celebrations on the birth of a new baby or the new year. In theatre, the mask is shorthand for the character’s character, if you will.

Masks have played a part in Japanese religious rituals as far back as the Jomon period, which covers 10,000 BC to 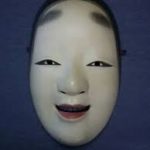 300 BC, and were originally made from pottery or shell. They were often representations of the ancient gods, which number eight million (the Kami).

From the 6th century, masks were used in dance displays, with the Kagura masks, covering the face, still worn today. The Gigaku masks, which went over the whole head, unsurprisingly died out more than 150 years ago. Today, we’re probably most familiar with the somewhat blank ‘Noh’ masks, worn in theatre performances since the 1200s.

Again, in Africa, masks were part of rituals, with the earliest masks dating back to the Palaeolithic time. Representing mythological figures, ancestors and the spirits of animals, the African mask maker was an important and deeply respected member of the tribe. As well as covering just the face, masks can also be worn to cover the head entirely, as a headdress, resting on the shoulders or just on the top of the head or forehead.

Usually made of leather, fabric or wood, masks have different significance depending on where they’re used. The Ngil mask of Ghana, for instance, was worn by the Fang tribe when initiating new members into their secret male society. Rather excitingly, wrongdoers were punished at the same time, so we have to hope that the masks didn’t lead to unfortunate mix-ups. 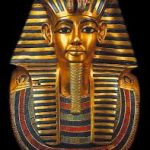 The Ancient Egyptians are probably the best-known civilisation for using death masks, thanks in no small part to the instantly-recognisable gold mask of the boy king Tutankhamun, who I was fascinated with as a child.

He wasn’t the only person to have a mask, of course. Most mummies got one, to protect their faces in the tomb, and also because having one increased their chances of getting into the afterlife – if they looked attractive to the gatekeepers, they would be welcomed in. This is why masks often feature blue hair and golden skin, to mimic the appearance of the gods.

Inscriptions on the masks, whether texts or images, also helped those in the afterlife. Originally made by simply hardening the outside of the shroud, masks were later made by creating moulds of the face, and then from precious metals.

Masks were also worn by the priests performing the funeral rites. The most important of these was ‘wepet-er’ – The Opening of the Mouth ceremony. Donning animal skin robes, and sometimes a mask representing the jackal-headed god of embalming, Anubis, the priest or son of the deceased carried out the ritual.

Opening the mouth meant the deceased was now an ‘akh’, a spirit which could see, speak, hear and receive offerings of food and drink. It also could be performed on a statue, which stood in place of the corpse.

One of the most famous death masks, though, has to be of Oliver Cromwell, Lord Protector, parliamentarian and 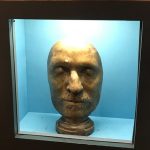 military leader, a wax replica of which is now in The British Museum. It was cast immediately after his death, and is remarkably lifelike (if you see what I mean!)

Although a divisive figure in life and death, Cromwell received a lavish funeral after his death from septicaemia in 1658. He didn’t rest in peace, however, as three years later, his corpse was subjected to a series of grisly activities, including being ‘executed’, his head stuck on a spike and then displayed in various private collections.

In later years, the authenticity of the head on show was under much dispute, with many claiming it looked nothing like the disgraced ruler, which is hardly surprising. The mask was undoubtedly used to back up these claims, and eventually the head was reinterred with the rest of him in Westminster Abbey.

Equally fascinating to me is the tale of L’Inconnue of the Seine, not least because it fits in so well with the Victorian taste for the macabre and is less disturbing than their fondness for photographing the dead (and stuffing the dead…)

Estimated to be about 16 years old, the Unknown Woman was pulled out of the Seine in Paris sometime in the 1880s. There were no marks or signs of a struggle on the body, leading investigators of the day to conclude she was most likely a suicide. 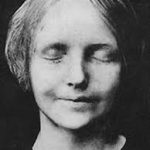 At the time, it was common to put unidentified corpses on display in the mortuary, ostensibly in case they could be claimed, but mostly because it was a fun and free trip out for the locals.

Nevertheless, her face was mesmerising to everyone who viewed her, resulting in an attendant making a cast. Copies of this were snapped up and on show in private homes across Europe (I told you they were weird!), and author Albert Camus whimsically renamed her “The Drowned Mona Lisa.”

Her face was endlessly sketched, writers concocted elaborate, tragic histories for her, and she was regarded as an aesthetic ideal for a generation of German girls, which doesn’t say much about how society viewed women. But that’s a conversation for another day!

As if all that wasn’t enough, L’Inconnue’s strange third life began in the 20th century. Norwegian toymaker Asmund Laerdal was initially famous for his realistic ‘Anne’ doll, with natural looking hair and a face in repose.

After his young son nearly drowned, Laerdal performed CPR, making him the perfect person to sculpt a doll for resuscitation practice when it became clear one was needed. He adapted Anne, giving her the face of the unknown drowning victim and a human-adult-sized body.

He decided it was preferable for men to get to practice on a female doll, but we won’t talk about that either. Known as CPR Annie in the US and Rescue Anne elsewhere, it’s estimated that 2m lives have been saved using techniques taught with the dummies.

The History of Masks: The History
The Classroom: Japanese Masks
Science Alert: Resuci-Annie