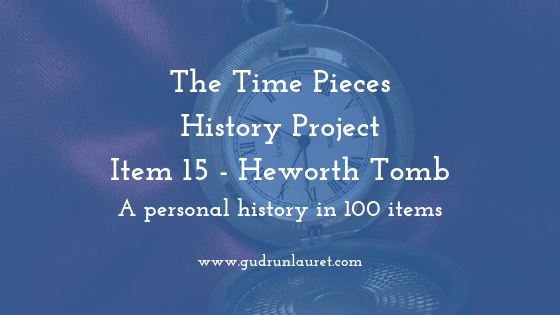 First time on the blog or new to the Time Pieces History Project? Find out what it’s all about here, and then come back to this page for today’s item – Heworth Tomb.

The Heworth Tomb – Introduction to Item 15 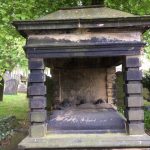 Heworth tomb represents someone who’s popped up before. My great-grandmother, Mam, who you met in blog one, died when I was 10, but we spent quite a bit of time together. I used to go with her when she did the messages (went to various shops), which was more often than not done near her house.

However, one day we did walk as far as Heworth (a neighbouring small village), and like many children of my generation and the two before, I was taken to visit this grave in the cemetery of St Mary’s Church, which we saw in blog nine and which will come up again later.

The tomb, with its elaborate relief of three small children tucked under the covers, was intended to serve as a dire warning of what might happen if I took a lighted candle to bed with me. Protesting that the only time I went anywhere near a candle was on a birthday cake was futile. And also ironic, because as it turns out, the children immortalised here didn’t burn to death either.

The History of the Tomb 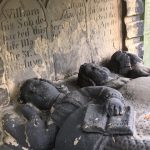 So, while the children definitely died (you’d hope so, otherwise it would be pretty weird to erect a tomb!), the reason for the bed was to show that they ‘were at rest.’ We know they didn’t die in a fire, because their dates of death cover six years in the early 1700s. Who doesn’t love a genteel euphemism? Nevertheless, it stands as a loving tribute to a father’s grief at the loss of his infant children.

Still, the truth never gets in the way of a good story, with at least two supernatural claims attached to the tomb – that if you get too close, you hear the children screaming (more likely impressionable toddlers terrorised by elderly relatives into believing they’ll meet the same fate). The other is that if you dance around it three times at midnight the children will join in. 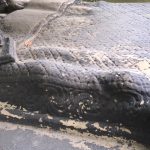 Detail of the Durham Quilt on the tomb ‘bed’

However, things get confusing when you look a little more closely at the inscriptions. Don’t worry if you’ve got bad eyesight or you’re squinting to make out the rubbed-out parts – the bed is a memorial to three Haddon children – William, George and an unnamed (or indecipherable) sister. Joseph Haddon was apparently a stonemason, so probably made the monument himself. 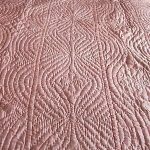 An example of a Durham Quilt

On the other side, though, is a dedication to a John Makepeace and his wife Jane, who died some hundred years later. Why was this? Is John a descendent down the female line? Digging about, I couldn’t find any explanation for this, including on the church’s own website. I’m hopeful that someone will have an answer for this.

As an interesting aside, the elaborately-patterned cover draped over the children is designed to mimic the Durham Quilt, which is made from one piece of material. The pattern is applied with stitching. They differ from other quilts because the inner wadding is made from cotton. The earliest quilt dates to around 1708, in Cumbria, so not long before the tomb was erected.

One peculiar hobby is grave rubbing (not to be confused with grave robbing, which is definitely frowned upon these days). I had a goth friend at high school who’d indulge in this, flitting through graveyards with her black velvet jacket buttoned up to her neck and her skirt like dead leaves rustling through the grass. 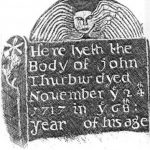 The Association for Gravestone Studies in Massachusetts has produced a top tips leaflet on grave rubbings, including asking permission first, avoid using permanent markers and only rub graves without cracks.It turns out that rubbing can cause damage, because of the pressure applied, so it’s important to be gentle. On the other hand, when done right it can also be a way of preserving images on a tomb that’s deteriorating.

Butcher’s wax paper tends to be the surface of choice for modern grave rubbings, with charcoal or wax crayons. However, the Chinese (yes, again!) method uses a plant-fibre paper which is then stuck to the stone with a water and rice starch paste.

I’m not one for conspiracy theories really, but they can be a fun rabbit hole to fall down while you’re wasting time. In recent years, I’ve particularly enjoyed the Avril Lavigne doppelganger and the fake One Direction baby. These ones interest and amuse me much more than governments hacking brains.

However, I was first introduced to this concept by a work colleague who lent me a book on the cover-up of the death 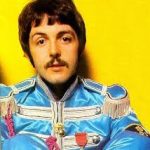 of Paul McCartney, one-time bass player in The Beatles and the man who described festival attendees as “Glastonburgians” (I was there, so I know this for a fact!)

Paul McCartney allegedly died in a car accident in 1966, and a lookalike was brought in to replace him so the band could continue. The replacement had some plastic surgery, and grew the moustache that Paul sports in the Sgt. Pepper’s artwork the following year, to hide a scar on his upper lip.

However, the surviving group members were sending clues to the most devoted of fans that something wasn’t quite right. Spotted by a college student in 1969, playing Revolution Nine from The White Album backwards, you can hear “turn me on dead man”, and John Lennon can be heard saying “I buried Paul” on Strawberry Fields. 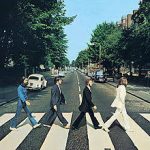 The theory was sadly not mentioned during the celebrations to mark 50 years since the release of Abbey Road, which is a shame, because there are several clues on the front cover.

John is wearing white, the traditional colour of mourning in several countries. Ringo is in black to represent the undertaker, while George’s more casual style is the garb of the gravedigger. And ‘Paul’ is barefoot, because he is the deceased. The double also holds his cigarette in his right hand, whereas McCartney is left-handed. I love the attention to detail!