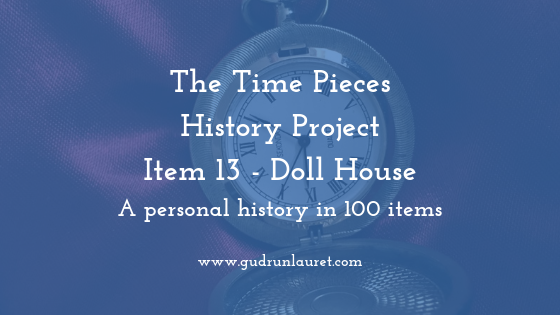 First time on the blog or new to the Time Pieces History Project? Find out what it’s all about here, and then come back to this page for today’s item – the doll house.

The Doll House – Introduction to Item 13 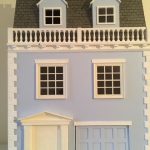 I always wanted a doll house. I have always been fascinated by perfect miniature replicas of things, even mundane objects such as beds and clocks. Doll houses, though, are expensive, and my parents wouldn’t buy me one. I had to make do with repurposing Majesty’s My Little Pony Castle into a Barbie Playhouse.

For my 21st, I was summoned to my adopted grandparents’ house in York (they’ll appear in future blogs) to collect my birthday present. My dad and I drove down and then accompanied Margaret to the place my present was waiting.

A middle-aged man who lived with his dad made doll houses for a living (or perhaps a hobby, I can’t quite remember) and he had lovingly crafted a beautiful Georgian house for me. Which he had then ‘modernised’ by putting in a garage door.

Nevertheless, I was delighted and enchanted in equal measure, and made a promise right then to fill it with delicate, tiny items. I’m ashamed to say that (ahem) 15 years later I have only decorated one bedroom and the bathroom, but I WILL get round to the rest. As I’ve now broadcast my intention publicly, I’d better get on with it…

The History of The Doll House

Originating in Northern Europe in the 16th century, the doll house was not intended as a children’s plaything. The German word “dockenhaus” means “miniature house”, and in Holland they were known as “cabinet houses”, designed with hinged fronts to show off the tiny and rare objects within.

Dutch art collector Sara Ploos van Amstel created two doll house replicas of her own homes in the 1740s, and these are on display in the Frans Hals museum and the Gemeentemuseum. We can see that they really were an 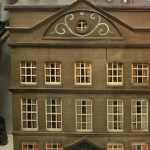 ostentatious display of wealth, as they could cost as much as an actual house.

“Baby houses” in 18th century England had more realistic interiors and were often designed to be smaller versions of real homes, with each room recreated in miniature form.

However, while the wealthy used them as unusual knick-knack shelves, for German girls the doll house was a practical tool to show them how to run a household. ‘Nuremberg kitchens’ were built from metal and demonstrated the right way to set up the most important room in the house. 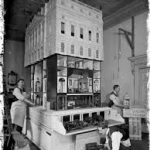 It wasn’t until the early 20th century that they were actually built and marketed for children, with lightweight materials making them cheaper and easier to play with. The most famous doll house of the century, though, is probably the one made for Queen Mary, consort of George V, by architect Sir Edwin Lutyens. Intended to boost morale after the First World War, the house features objects from the best craftsmen of the time.

My love of all things tiny was also encouraged by reading “The Borrowers” by Mary Norton. After reading the first book at my grandparents’ and being intrigued by how they reused everything they found, I went out and bought the rest.

In The Borrowers Afloat and The Borrowers Aloft, the Clock family (so named because they originally lived behind the grandfather clock in their first home) have moved to Little Fordham, a replica village, where they find everything is just the right size.

Miniature villages appear all over the world, with the oldest dating back to 1929 – Bekonscot in Buckinghamshire.

Originally built by Roland Cunningham, his family and household staff ended up helping him to run it. The thrilling chase scenes in Hot Fuzz were filmed at Hatfield House in Hertfordshire. My ambition is to have a model village of my own one day, but I think that’s a long way off!

Bekonscot is also home to a model railway, which goes around the park, through fields and villages, and features a video camera on the front to record what the driver “sees”. Little Fordham also had a train service.I’m not a trainspotter, although I did have a Postman Pat trainset in the mid-eighties. However, the model railway seems like the ideal accompaniment to my as-yet unbuilt miniature village. 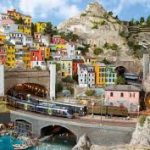 Depending on how seriously you take it, the railway is either a bit of fun or a serious attempt at developing your own railroad system. The earliest incarnations were the Victorian “carpet railways” – no tracks, but powerful enough to cross the living room. Electric trains were introduced at the start of the 20th century, and over time have become more realistic.

The Miniatur Wunderland in Hamburg is the largest in the world, with 15,715 metres of track, more than 1,000 trains and over twice as many people. It even has an airport. I doubt it would fit in an attic.

The Doll House Collection at Wallington

When we were very little, my parents had a National Trust membership. We didn’t tend to go very far, usually having day trips at some of the stately homes local to us. One of my favourites, which my grandparents also enjoyed visiting, was Wallington Hall. 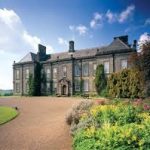 While the grownups liked the extensive gardens, both for the beautiful floral displays and for their ability to wear out my excitable brother, I preferred the Hall itself. I liked wandering through the rooms, which, the National Trust site explains, was originally built by the rather famous Fenwick family, before being turned into a country retreat for the equally famous Blacketts.

However, my most favourite part was the children’s toy exhibit, full of cases of ancient playthings. Up a little ladder, past a sign that said “adults must be accompanied by a responsible child” was the doll house collection. There are 18 houses on display, with the oldest dating back to 1835. The most impressive is the Hammond House, with 77 dolls, 36 rooms and 1,500 items inside it. I think I need to start decorating!