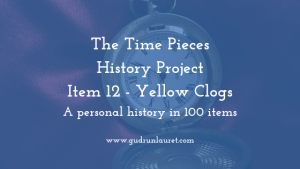 First time on the blog or new to the Time Pieces History Project? Find out what it’s all about here, and then come back to this page for today’s item – yellow clogs.

The Yellow Clogs – Introduction to Item 12 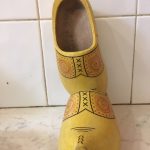 My dad brought these yellow clogs back from Holland when I was about four or five. They were a bit big for me, but I used to clomp around the house and fall over anyway. I remember they were really uncomfortable and dug into the tops of my feet even with socks on. Once my feet grew, they were put on display on a windowsill.

Shoes often appear as decorations in the family home – I also had a rather fabulous pair of Turkish slippers, with pink satin lining and pom-poms on the toes, which were on show once I grew out of them. And we have boots on the Christmas tree too (as well as our angel).

The History of Clogs 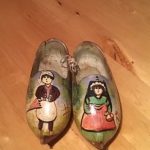 Clogs were designed as work shoes, so hopefully those toiling out in the fields didn’t find them quite as uncomfortable to walk around in as I did! Originating in Holland in the 1300s, they spread across Europe and were worn by peasants and workers of both genders. They were especially popular during the Industrial Revolution, which is hardly surprising.

Clogs are based on wooden-soled shoes worn during Roman times. ‘Calceus’ shoes had leather straps that crossed over the foot, which were ideal in Mediterranean climes but not so much in Scandinavia, so the covered style evolved to suit the needs of the wearer.

How to Make Clogs

The clog wearers sometimes made their own shoes, or went to a klompen maker (the Dutch word for covered clogs). They are usually fashioned from tulip or yellow poplar, or willow wood, because these are hard-wearing and waterproof. 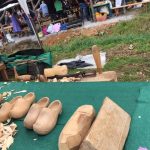 Carved clogs on display at a French festival

There’s not much to the manufacturing process – a block of freshly-cut wood, known as a blank, is put first into a shaping machine to fashion the outside of the shoe. The left and right shoes are cut simultaneously, with the blocks rotating as they’re made.

A borer carves the inside of the shoe, then it’s refined and left to dry for approximately six weeks. After that, they’re carefully sanded, and ready to be taken out to work. They’re only varnished and decorated if they’re to be sold as souvenirs.

The red and black pattern on the top is meant to look like leather shoes, and designs vary. More clogs are made as souvenirs than for workwear these days, although fishermen and factory workers do still wear them.

I feel like I’ve had a lucky escape by not having seen clog dancing, although maybe I’m missing a treat. It began in cotton mills in Lancashire in the 19th century, which for some reason conjures up visions of dour-faced mill workers clopping with great seriousness across the factory floors. 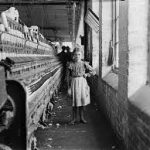 Clog dancing also became popular with coal miners in Northumberland and County Durham. It was a good way to keep warm in winter and gave workers something to do. Originally, the dances were done by men, and in the 1880s there was a World Clog Dancing Championship.

Women eventually joined in, and it became more of a social event – dances took place in music halls rather than at the mills. Lightweight ash clogs were easier to dance in, and it was an excuse to get dressed up. Metal nails attached to the soles of the clogs meant that they could be tapped on the floor to create sparks.

In Lancashire-style dancing, most of the footwork is at the toes, with the clogs being reinforced with a steel ramp to keep the heel off the floor. Apparently, competitors can be disqualified if the heels come down!

The Northumbrian version is focused on the heels, with flat, less decorative shoes but a much more intricate tapping style. The arms must be held at the sides, with no upper body movement if possible. There is also a dance performed on a stool, with competitors having to leave if they fall off…