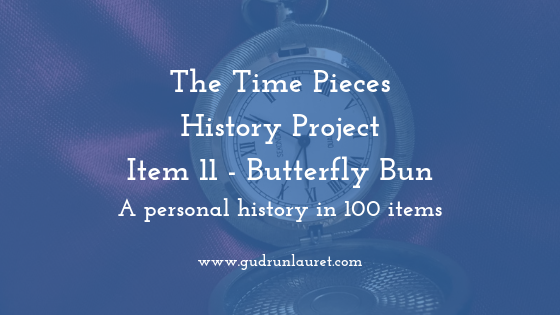 First time on the blog or new to the Time Pieces History Project? Find out what it’s all about here, and then come back to this page for today’s item – the butterfly bun (a small cake). 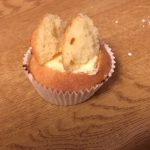 My grandma was a big part of my early life. She babysat and sang me to sleep, taught me to knit (I’m very bad at it, but that’s not her fault!), joined in all our games and looked the other way when I put so much vinegar on my chips the corned beef slices floated.

When I started secondary school miles from home, she came with me every day of my first week so I could learn the bus route, and she shortened my school skirt at the end of my first year (all the other girls had to roll theirs up). She pestered me morning, noon and night to revise for my GCSEs, and I’m disappointed she didn’t get to see that it paid off.

The other thing she did was to inspire my love of cooking, and baking in particular. She made everyone’s birthday cakes, but the first thing she taught me to make was butterfly cakes (sometimes called fairy cakes), decorated with little wings and filled with butter cream.

A Short History of Baking

The oldest oven in the world was discovered recently in Croatia, and is believed to date from 6,500 years ago. Freshly-made bread has traditionally been baked by women for their families, but by men for commercial use. 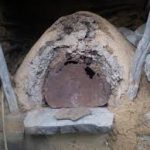 An example of an early oven

Early humans mashed grass grains with water, spread it onto a hot, flat rock and ate the resulting ‘bread’. As you might imagine, the discovery of fire made it both easier and nicer. The Egyptians used yeast in their bread, and the Ancient Greeks developed covered bread ovens.

The Romans, of course, took this further, with the setting up of the Baker’s Guild in 168BC and pastry cooks becoming much desired. In 1AD there were over 300 of them, each producing their own specialities, including fritters and pretzels. 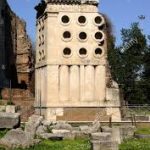 When I took the “Virtual Rome” course with FutureLearn, I explored the Tomb of Eurysaces the Baker. This rather odd-looking structure stands at the Porta Maggiore as a testament to an artisan who lived in the time of Emperor Augustus. It was built in about 30BC, and commemorates Eurysaces’ rise from freed slave to wealthy businessman.

Baking then began to travel the world, spreading across Europe and into Asia. In the Middle Ages it was a luxury, and most people couldn’t afford to do it at home. Bread bakers were found in London, though, and the wealthy could enjoy wheat bread and solid cakes (weighing up to 20lb).

An article from the BBC’s History Extra Magazine describes gingerbread as being made with breadcrumbs and mince pies featuring mutton in the 1400s, although the spiced, sweet wigg doesn’t sound too bad. Over the next two centuries, economic growth and international trade introduced raisins, currants, cream and butter to the mix (pardon the pun).

By the 18th century, bakers had access to cheaper sugar, equipment such as cake tins and recipe books to inspire them. Shopkeepers could sell fresh bread and pastries once ovens became more affordable, and it wouldn’t be long before housewives would be able to do the same to feed their families.

The word ‘cake’ comes from the Old Norse word ‘kaka’ and the West Germanic ‘kokon’ and originally meant “flat or comparatively thin mass of baked dough.” By the 15th century, the term also referred to a baked combination of butter, sugar and flour. (If you’ve read blog six about the dictionary, you’ll know that I love learning about the origins of words).

However, they weren’t much like cakes we know today – made with dried fruit, nuts and honey, they were similar to 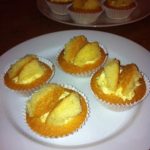 bread and could last for months. European bakers in the Middle Ages made gingerbread and fruitcakes. As with bread, cake-making evolved with the availability of things like sugar, lower prices and mass production.

By the 19th century, cakes were made with baking powder and refined flour. Icing was made with butter cream, which is what I use in these butterfly buns. Interestingly, early icing was boiled and baked. According to a Quora user, it was made with egg whites and sugar and poured over the cake, which was then baked again in the oven. 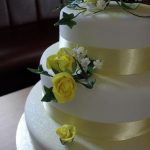 If you’ve been to a wedding in England, you’ve probably been offered a slice of fruit cake covered in hard, white icing. The bride and groom have three tiers of cake, with the largest cut up for the guests, and the smallest kept for the christening of the firstborn child.

Fruit cake is mostly dried fruit and strong alcohol, so it keeps for ages – if you can resist eating it all! Similarly, Christmas cake is made in the same way, and can be round or square according to preference. Christmas pudding is also the same ingredients, but it includes suet too.

In France, couples have a croquembouche – a pile of profiteroles bound with spun sugar. Croquembouche means “crunches in the mouth”, and is also served as a christening cake. The Scandinavians also have a ‘tower cake’ – the kransekake – rings of almond-flavoured cake stacked one onto the other and stuck together with icing. It’s eaten for all kinds of celebrations, not just weddings.

In China, home of ancient traditions (see blogs two and three), ‘marry girl cake’ is made with sponge, bean paste and walnuts, and dates back to around 220-280 AD, in the Three Kingdoms period. These cakes are sent out to the guests when the invitations are posted. 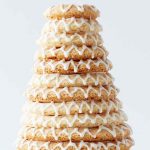 In many European countries, traditional Christmas desserts are more like bread than cake. The Italian pandoro is made with yeast and dusted with icing sugar, while the German stollen has dried fruit kneaded into it and is rolled into a cylinder with marzipan in the middle (I’ve made it a couple of times and it takes a while!) In Spain, turron, which is made with nougat, honey and almonds, is enjoyed during the festive season.

Understanding Rome: The Baker’s Tomb
History Extra: A Brief History of Baking
The Things We’ll Make: Cakes from Around the World