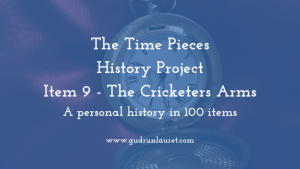 First time on the blog or new to the Time Pieces History Project? Find out what it’s all about here, and then come back to this page for today’s item – The Cricketers Arms. 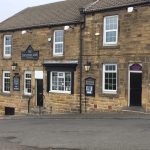 The Cricketers Arms (or the Cricks, as it’s sometimes referred to) is in Bill Quay, where my Dad and my Nana grew up, and only three miles from where we live now. My family have been going in there for decades, and whenever we pop in we try to sit at the table Dad (from Blog 1) always preferred.

Once through the main door, you can go left into the bar area or right to a section with seats set slightly back from the main area. The pub interior is actually one big room, with the horseshoe-shaped bar allowing access from several points. There’s also an alcove with a darts board, and a little platform for the pool table. The jukebox and open fire complete the look.

Another family claim to fame is that my great-great-grandmother’s house was next door, although all that remains of the building is the step, which you can just see to the right of the pub. Up until recently, we used to park there before going for a walk, but now it’s the beer garden.

The History of The Cricketers Arms

The Cricketers Arms dates to 1868, and was one of 13 pubs in the area. Now, it’s one of only two pubs still open after The Albion was turned into a house. The other is The Wardley Hotel, which was rebuilt in 1897 and stands on its own where Ann Street once was. 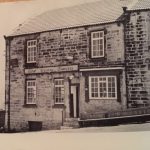 The pub is made of local sandstone, and is all that remains of Joel Terrace (apart from the family step). In the picture we can see it was also known as The Quay Tavern in the early 80s, and previously as The Cromwell. Eileen Burnett’s book South Tyneside Pubs tells us that a Mrs. Jayne Wynn advertised the pub as “The Board Inn” in 1850, and 15 years later she called it “The Letter Board Inn”. By 1873, she’d renamed it again, to The Quay Tavern. Who knows why she did that!

From what I understand, the workers from each industry had their own pub to drink in after work, which is why there were so many. I know many local history enthusiasts will be reading this, so I look forward to being able to update and add to this section soon!

The History of Bill Quay 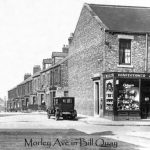 Apparently, the name Bill Quay comes from a piece of land which protruded into the River Tyne, which was known as the ‘bill point’ or ‘Hawk’s Bill.’ It was dangerous for boats sailing past, so it was removed to make travel easier.

In his book “Discovering Your Neighbourhood”, (there is no publication date, but I’d guess around 1980, as there’s a reference to a research paper from 1977), Les Turnbull describes Bill Quay as being opposite the British Shipbuilder yards at Walker, with the electrical engineering works to the East and various industries along the front.

A lot of the Victorian terraces were demolished long ago, although still standing is Hainingwood Terrace, which, Turnbull informs us, is on the site of Hainingwood Farm, where legend has it Oliver Cromwell once stayed. There’s also a Cromwell Road, so perhaps it’s a true story. 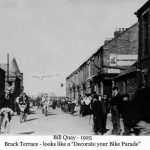 The streets that once stood around The Cricketers Arms were home to the families working in coal and shipbuilding (my family were shipbuilders, and most people in Gateshead will have ancestors in one or other of these industries, if not both). There was also a general store and a cinema not far from the pub.

Turnbull also details the expansion of the glassworks in the early 1800s, set beside the paint and colour works, which, when listed for sale in 1821, included a fire brick kiln, houses for the foreman and labourers, a cooperage and its own quay, which could hold a ship weighing 200 tons.

With the nearby alkali and lead works, as well as The Co-operative Wholesale Society Cabinet Works just up the road, all providing work for the local populace, it’s easy to understand why the decline of traditional industries had such a devastating effect on Bill Quay and Gateshead in general.

A Murder in Bill Quay

As well as the pub, Joel Terrace is infamous for being the home of murdered seven-year-old May Ina Stewart, killed in August 1902. Mary, one of six children, had gone to visit her uncle one Saturday while her dad was at work in Hexham, some miles from Bill Quay. James Stewart instigated a search for his daughter when he got home late from work and realised she was missing.

The search continued until the Monday, when a second search in the long grass at Wood, Skinner & Co’s unused brickyard found Mary’s body. A 23-year-old cartman, Thomas Nicholson, was soon arrested for the crime. It was believed the hit her over the head, raped and then throttled her. He never admitted to killing her, but was sentenced to death. There is a memorial to her in the churchyard of St Mary’s in Heworth, which will pop up again in a couple of future posts.

Why The Cricketers Arms? 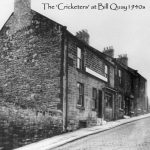 The Cricketers in the 1940s

Well, no prizes for guessing this one, really! The pub isn’t far from the local cricket club, which has been there since 1866. Interestingly, Historic UK says that sports-related names are a recent development, but this isn’t the case in Bill Quay.

The reasons and history behind pub names are fascinating to look into, and deserving of a post of its own. Names such as the Fox and Hounds are also fairly obvious, and relate to hunting. An animal plus a colour is heraldic, such as The White Hart, named after Richard II’s badge.

Medieval publicans, lacking painted or metal signs to hang up outside their inn, would leave an object outside to help people identify the pub from others, including kettles and boots. However, the practice is older than that, with Roman taberna owners hanging vine leaves outside to show that wine was available at the bar. 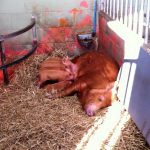 I can’t write about Bill Quay without a quick mention of the nearby community farm, where I’ve spent many happy hours. When I was a child, it was full of all kinds of animals, and my brother and I attended ‘play schemes’ over the summer holidays. We took part in all kinds of activities, including nature walks, painting, crafts and games.

As an adult, my goddaughter and I have stroked the small animals, watched dog shows, happily scoffed sausage sandwiches at the sadly closed cafe and cooed at the piglets. We never got into where the sausages came from, but she’s clever enough to know!

In recent years, the local council withdrew its support, meaning it’s struggling to stay open. I’m a Friend of the Farm and make a monthly donation to help out. At this point in time, its future is uncertain, but I’d like to see it flourish again.