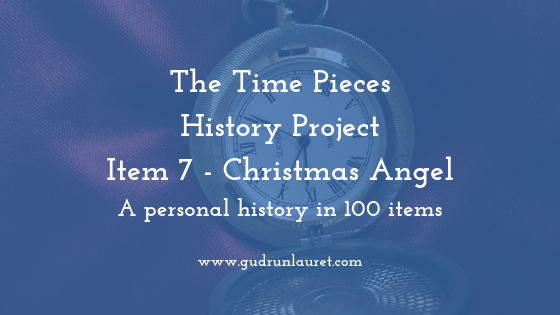 First time on the blog or new to the Time Pieces History Project? Find out what it’s all about here, and then come back to this page for today’s item – the Christmas angel.

Unless you’re reading this in December, then the appearance of a Christmas Angel at this point in the project is probably a bit strange. Because it has personal significance, though, I wanted to include it early on. This particular angel sat on our family tree until a couple of years ago. 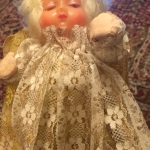 She’s a bit battered now, and the golden cone under her skirt is crushed and loose. In recent years she’s been replaced with stars – both a generic one from a set of decorations from B&Q, and a sequinned one we bought on our honeymoon in India. Nevertheless, nobody has the heart to throw her out, and every year I intend to rescue her from the box and keep her somewhere safer.

She reminds me of childhood Christmases, which are arguably the best ones, when the tree going up was a time of wonder, not one of bafflement while watching the boys wrestling the too-wide trunk into the holder. In those days, the tree lights were more interesting – lanterns, flowers and icicles – and each of us had a red apple we hung up. I clearly remember the year we added the fourth for my new baby brother. So unseasonal, yes, but also very special. 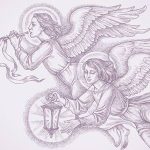 We aren’t churchgoers in our family, so the religious significance of angels has mostly passed me by. However, angels in various forms turn up in pop culture, from TV’s Lucifer and Good Omens, through to films such as Dogma and City of Angels. They also crop up in music – Maybe Angels by Sheryl Crow and Angels by Robbie Williams (shudder) – and in fiction, including children’s books such as His Dark Materials (Philip Pullman) and Skellig (David Almond).

Angels are described as spirit beings, immortal and innumerable. Although they have male names and sometimes appear in the form of a man, they are genderless. They have different jobs, including protecting and comforting believers, carrying out the will of God, and guarding the tree of life.

There are four types of angels. Seraphim are described as fiery angels with six wings who serve God, and the Cherubim, who guard the Tree of Life in the Garden of Eden, equipped with swords of fire.

The Archangels vary in number depending on which religion you look at, although Michael is always included. The ‘chief angels’ or ‘angels of origin’ also include Gabriel, Raphael and Azrael. Finally, the ‘fallen angels’ (not a term used in the Bible), refers to those cast out of heaven and who tempt humans into sin.

The History of the Christmas Angel

Angels weren’t always given the top spot on the Christmas Tree. They were first introduced in around 1840 in England, with Queen Victoria’s consort, Prince Albert, making them popular. However, the German wife of George III, Queen Charlotte, had one put up in Windsor in December 1800. Her countryman, 16th century preacher Martin Luther, is believed to be the first person to take a tree into the house.

Those early trees were lit with candles (which always seems like a frankly ridiculous thing) and decorated with glass ornaments, paper flowers and gingerbread biscuits. A figure of the Baby Jesus was put on the top at first, before the angel (who appeared before the shepherds), or the star (which led the Wise Men), became more popular.

The Weeping Angels, in my opinion, are the most terrifying of the Dr Who baddies. They look scary, they do horrible things, and they’re really hard to defeat. I know for a fact that if I ever came face to face with an Angel, I’d be in trouble.

First appearing in season three in the episode ‘Blink’, David Tennant’s Tenth Doctor managed to scupper their plans, but (spoiler) Matt Smith’s Eleventh Doctor was unable to prevent them from finally claiming Amy Pond (and the luckless Rory) in ‘The Angels Take Manhattan’. 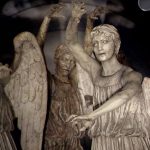 The Weeping Angels are described as being almost as old as the universe and appearing as ‘quantum-locked humanoids’ sufficient observation changes the thing being observed). They often had to cover their faces so they didn’t look at each other and trap them in stone form for eternity, hence the term ‘weeping’.

If you were unlucky enough to encounter a Weeping Angel, you had to keep looking at them for as long as possible. While your eyes are on them, they are frozen in position, but if you blink, they change stance and get closer. Unfortunate victims then found themselves sent back in time (the periods of history varied) and living out the rest of their lives wherever they landed. The Angels then took the time energy of the victim’s life.

Finally, I had to give acknowledgement to everyone’s favourite late 80s/early 90s pudding (dessert), the lurid Angel Delight. In actual fact, it was launched in 1967 by Bird’s, when it came in a strawberries and cream flavour. Claymation stars Wallace and Gromit helped boost its popularity when they appeared in a series of adverts in the 90s to mark the introduction of the sugar-free varieties. 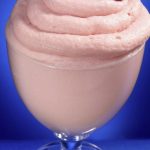 I remember begging my mum to make it for me and my brother, impatiently waiting for the milk and powder concoction to turn into a wobbly, creamy, sloppy mess. It now also comes in big tubs as well as sachets, and ready-to-eat pots, which I need to look for next time I’m in Tesco (other supermarkets are available). Visit the website for recipes.

If all this talk of puddings is making you ready for afternoon tea, check out my post on tea and teapots!

CARM: What is an Angel?
Why Christmas: The Tree
TARDIS Fandom: The Weeping Angels