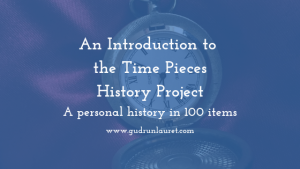 My Time Pieces History Project has been inspired by love of history and a desire to write about it more. The concept was, of course, slightly influenced by the brilliant series “A History of the World in 100 Objects”, a collaboration between BBC Radio 4 and the British Museum, curated and presented by then-Director Neil Macgregor.

I have no intention of trying to replicate such a vast and ambitious project, nor do I have the breadth of knowledge to do so. Instead, my 100 items are things that are of interest to me, which I hope will be interesting to others, too.

How the Time Pieces History Project Will Work

I’ve split the items into five categories – Personal, North East England, Arts and Culture, Around the World and Hobbies and Leisure – and I’ll be sharing two per week for 50 weeks, starting on 18 July.

I’ll be creating video, audio and a blog for each one, researching the direct history of the item and then other things around it that I’ve learned. I love the book Histories of the Unexpected by Sam Willis and James Daybell, which is based on their podcast of the same name.

I’m hopeful that as time goes on, more people will want to contribute, either in the form of their own objects to share or particular knowledge on one of mine, or to offer a new angle on my version of history. I’d like to interview people as well as having guest blogs.

The project is intended to evolve, so items aren’t shared once and forgotten about – they’ll be revisited over the year. I’m also planning to turn my findings into a book once the project is finished, which I’ll self-publish towards the end of 2020.

The first 20 items are all personal to me, and almost all are from my childhood. There was much deliberation on the final selection, but I’m pleased with my choices. There’s an item to represent each significant member of the family, and they might be surprised which thing I’ve chosen for them. 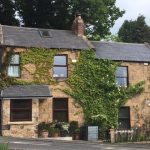 My childhood home – not one of the items!

The next 20 are things from the North East of England – historical buildings and landmarks. Some are instantly recognisable and even famous, but I’ve tried to temper that by introducing some lesser-known things which I can bring to a wider audience. The items in the other three sections are still being decided!

This is very much an open project, and the more feedback, suggestions and help along the way the better. I’ll be talking a bit more about myself and what led me to this point next week, as well as explaining how I’m using my professional skills to make the project easier.