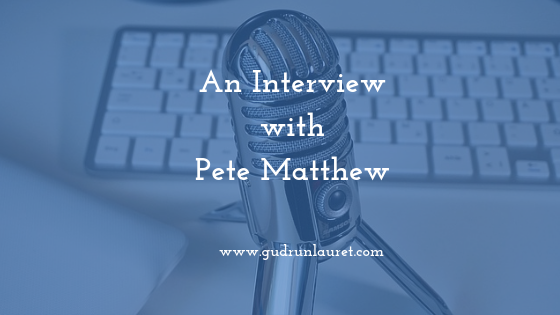 In the final interview of the series, I talk to Pete Matthew about his MeaningfulMoney podcast, why he started it and what benefits it’s brought to his business. If you’d like to read the full transcript, you can download it here (no email required), watch the video above or just listen to the audio.

Who is Pete Matthew?

Pete is a chartered and certified financial planner, helping his clients organise their finances to better serve their life goals and needs. He owns and manages a practice down in Penzance, Cornwall, called Jackson’s Wealth Management. He started out making videos before switching to podcasting six years ago.

Why Pete Started his Podcast

Pete says there are two answers to why he started a podcast – he had the idea to share his knowledge further, and then there were several triggers that encouraged him to actually get started.

He found that a lot people told him he was good at explaining things, he realised he wanted to help more people than he could just in a one to one situation, and then he read ‘Crush It!’ by Gary Vaynerchuk, which explains that if you have a clear message and you’re good at communicating it, the internet lets you share it to a wider audience than ever before.

Who are MeaningfulMoney’s Typical Listeners?

Pete says his niche is ‘the UK public’, which is not a niche at all. The average listener is aged between 30 and 50, often with a young family, and are taking a serious interest in their finances, usually because of a trigger such as wanting to buy a house or get married.

Those in their 50s are often trying to prepare for retirement. He says that the ideal listener to his show, though, is, ‘30s and 40s, reasonable income, wanting to take their finances seriously’, and it seems that this applies to a lot of the audience.

What Value MeaningfulMoney Listeners get

Nobody is born understanding finance, and, ‘The personal finance industry seems to delight in making things as complex and as impenetrable as possible, so the strapline of the show is ‘Everything you need to know, and everything you need to do to secure your financial future.’ 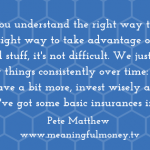 There’s no need for anything complex. People need to spend less, save more, get insurance in place and do some investing. Pete’s main aim is to help his listeners to help themselves.

How Pete Gives Advice in a Regulated Industry

The financial services industry is highly regulated, and Pete explains that: “It’s a fine line between information and advice, and really, that line is recommending specific products.” This means he can explain how an ISA works, for example, and why it’s a good thing for most people, but he can’t recommend an ISA from a specific company. Doing so is known as financial promotions and outside the rules of regulation.

He also can’t point people to a selection of ISAs to consider. Instead, he helps them understand that the ISA is just the container their money goes into, and what matters is how they invest. He can’t recommend a fund, but he can tell people how to find their own.

The education is what’s important, and people worry too much over making decisions. Pete also believes that many financial advisors use the regulations as an excuse not to get started with content marketing, when they simply need to observe the rules in the same way they do in their day to day work.

How Pete’s Podcast Helps him to Stand out

Pete says, “It’s not difficult to stand out in financial services, because we’re an army of grey-suited, middle-aged men, unfortunately”. Having the podcast gives people a way to know, like and trust him before they even approach him for direct support.

It’s very hard for people to go to a financial adviser and discuss their finances with a stranger. They worry that they’ll be made to look stupid or that the adviser will rip them off, and it’s an uncomfortable experience.

Pete says that 18 months after starting his podcast, he got an email out of the blue from a prospective client to say that he and his team had watched a number of his videos and they felt they could trust him, so they wanted to work with him.

He adds: “That was the first time I realised the power of putting yourself out online, on video or podcast or whatever. And now people all the time when they get in touch say, ‘Look, we feel like we know you already, how you work and you won’t rip us off.’” 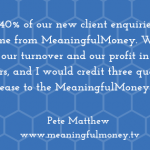 The Benefits Pete’s Seen in his Business

Pete admits that the benefits are incalculable. His profile within the profession has massively increased, and he’s been able to meet some people at the forefront of the industry.

More significantly, he says: “About 40% of our new client enquiries every year come from MeaningfulMoney. We have doubled our turnover and our profit in the last five years, and I would credit three quarters of that increase to the MeaningfulMoney podcast.

Jackson’s is a wealth management firm, so you can’t work with them unless you’ve got quarter of a million pounds to invest or are earning more than £100,000. It would be fair to assume that many of the enquiries they get is from people who don’t have that kind of money, but it’s not.

Pete says that: “The vast majority of enquiries now are absolutely in our sweet spot for the kind of clients we would like. And I’ve had multiple seven figure investment enquiries from MeaningfulMoney, and taken on some of those as clients”.

If you’d like to know more about Pete, listen to the MeaningfulMoney podcast (over 2m downloads at the time of writing), check out his books and courses, or work with him at Jackson’s, visit www.meaningfulmoney.tv. You can also connect with him on Twitter @meaningfulmoney.