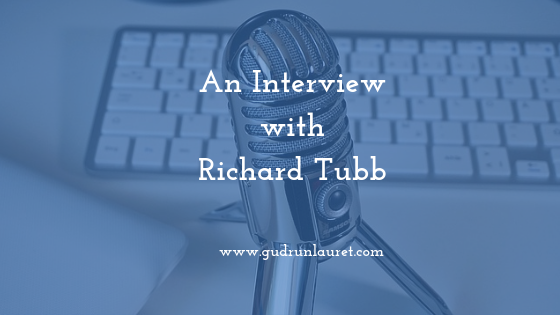 In the third interview in the series, I talk to Richard Tubb about his TubbTalk podcast, why he started it and what benefits it’s brought to his business. If you’d like to read the full transcript, you can download it here (no email required), watch the video above or just listen to the audio.

Who is Richard Tubb?

Richard used to run an IT business based in Birmingham, which he sold around eight years ago. He now works with the owners of IT businesses, helping them to concentrate on what’s important to free up their time and essentially to make more money.

He says the reason for setting up as a consultant was because while running his own IT company, he made a lot of mistakes, so he now helps other IT business owners to avoid all of those same mistakes. 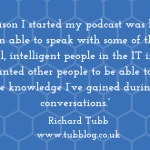 The reason Richard started his podcast was to share with the wider audience the expertise he’s benefited from when talking to some of the most successful, intelligent people in the IT industry. He says he realised after some conversations:

‘Wow, that was fantastic. That was real gold. I wish I’d recorded that, to share it with other people.’ The podcast format is like an informal chat in a coffee shop, and Richard’s biggest compliment is when people say the interviews sound like eavesdropping on a conversation between two friends.

Richard says that typical listeners to his podcast are the owners of IT businesses, specifically, what are known as managed service providers – MSPs. These are IT companies who provide outsourced IT support small businesses for a flat monthly fee.

Richard used to run an MSP and that’s his area of expertise, so he tends to appeal to a niche within the IT industry who are avid listeners to his podcast. However, he has been pleased to learn that he has a lot of listeners from outside the industry too.

What Value do the Listeners Get?

For those within the IT field, they get to learn from industry experts and find out about the latest developments in technology, as well as getting tips from other successful MSP owners.

For those in other areas, they are often big on personal development, so they enjoy listening conversations between Richard and very smart, successful people to pick up on the habits and techniques they use in their businesses.

Richard’s Advice for Those in ‘Boring’ Industries 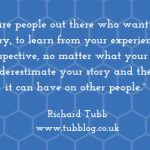 Richard explains: “We’re talking now about podcasting, but my experience going back 15 years to when I started blogging, the biggest barrier I had was the worry that nobody who would want to read about me talking about IT stuff, business and my journey”.

But it turned out there were readers, and he now has thousands of visitors every month. If you think you’ve got nothing to write about: “The reality is that people always want to have a peek behind the curtain of other people’s experiences and other people’s journeys”.

How the Podcast Helps Richard Stand Out

Richard says if he simply asked the CEO of a large organisation if he could pick their brains, the answer would be no, but if you invite them onto your podcast, you’re getting the valuable information you were looking for, and providing an enthusiastic, captive audience for your guest.

Another way TubbTalk helps Richard stand out is that having conversations with successful people reflects well on him – his listeners see that he’s connected to them.  It might not be your primary reason for having a podcast, but people will come to regard you as an expert in your field.

The Benefits of Podcasting to Richard’s Business

As well as making him an authority, Richard says that his podcast engenders trust in him and people feel that they know him. Over time, people get used to hearing your voice and what you’re like, so they trust you enough to do business with you.

He adds: “It helps people to know what you stand for, the things that you believe in, the causes that that you’re passionate about, and the people that you associate with”. It makes them feel comfortable about you when the time comes to buy.

To find out more about Richard, visit his website: www.tubblog.co.uk, which is where you’ll also find the full TubbTalk podcast archive. You can also connect with him on Twitter @tubblog.