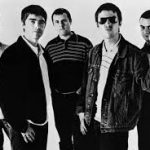 Apart from school and reading, music was a big part of my life in the 90s. My dad used to sing Pink Floyd to put me to sleep (The Division Bell, in case you’re wondering!) and I grew up listening to Crosby, Stills, Nash and Young, The Rolling Stones, The Who and David Bowie.

Britpop was in full swing by 1997, so it was a natural progression for me – boys with guitars, floppy hair and flared jeans playing catchy tunes. I was the proud owner of Oasis’ first three albums, the debut album from The Bluetones and the second (often mistaken for the first) offering from Ocean Colour Scene, Moseley Shoals, which produced four stand-out singles.

The most memorable of these was The Riverboat Song, used as the music to introduce guests on TFI Friday, which was hosted by Chris Evans and went out twice on Channel 4 on Friday nights. I don’t think my mum was a big fan, but I watched it anyway.

New and exciting music was released all the time, and I spent many happy Saturdays at the listening post in HMV, headphones clamped to my ears for the first encounter with the latest albums. I spent most of my pocket money on £1.99 singles. Two B-sides were always better than a remix of the main song.

Of course, while mod haircuts were having a revival, not everyone was as keen as I was on bands who wrote and sang their own songs while accompanying themselves. The Spice Girls had thrust “Girl Power” onto us whether we wanted them to or not, and teenage girls were struggling to walk in built-up trainers from Buffalo (or the cheaper versions from Schuh).

Also released in 1997 were novelty songs such as Barbie Girl, from the Danish-Norwegian dance band Aqua. This was a particular favourite of my mother’s, much to my shame. Chumbawamba released Tubthumping, which was catchy and played everywhere. The following year, lead singer Danbert Nobacon threw a bucket of water over then-deputy PM John Prescott at the Brit Awards.

Puff Daddy and Faith Evans’ rip-off of The Police and tribute to The Notorious BIG – I’ll be Missing You – was number one in the UK for six weeks, which I think is a good example of the inexplicable popularity of songs recorded in honour of dead celebrities.

I’ve put together a playlist of songs from 1997, which you can find here. The first six are songs I would have listened to, and the second half is songs that were in the British charts but not on my Top 40 playlist cassette, carefully taped from the radio on Sunday afternoons to edit out Mark Goodier’s links. Please let me know your favourites (or most hated!)

You can find the first blog here, the third is here and the final post is my original piece of writing!

Posted in Business and tagged 1997, about me